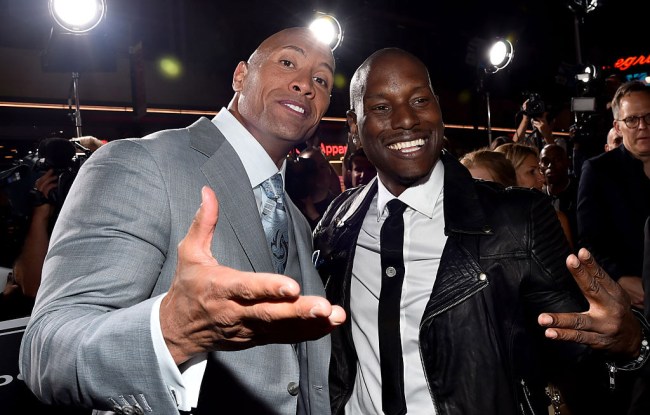 Fast and Furious star Tyrese is apparently very unhappy with Dwayne “The Rock” Johnson. He’s so unhappy, in fact, that he decided to go public and rip The Rock on Instagram for his Fast and Furious spinoff movie and for not returning his texts.

And here we thought that Vin Diesel and The Rock settling their beef would be the last of the infighting we’d see out of that “family.” Alas, that is not the case.

Now, Tyrese is the one with issues with The Rock and decided to get the beef rolling by commenting on a photo The Rock posted to Instagram…

And here’s what Tyrese had to say about it…

LOL. The Rock isn’t returning his texts. Wonder why?

Tyrese then shaded The Rock again with this post…

One of the key takeaways to this lengthy caption other than the opening sentence (“When you see the bullshit playing out in front of you and you can’t say anything cause they don’t want you to win the battles and lose the war.”) was where Tyrese wrote, “I went as far as I could go to help the cause I hope they do right by those funds and get it to the people……. You’re on the Forbes list is that all you’re donating? Oh ok……..”

For the record, The Rock said he was donating $25,000 to the Red Cross after Houston was hit by Hurricane Harvey.

Today, just a few hours ago, apparently Tyrese was feeling the heat and decided to slightly walk back his criticisms of The Rock with a very roundabout explanation for his shade. (Which as I am writing this was deleted from his account.)

“I have never and will never have a problem with this major movie star he’s my brother…. I repeat ever……. bro just being honest I didn’t like Bay Watch lol – but I did rent out 2 full theaters and take a bunch of kids with my daughter from her #PrivateSchool to support Moana!!!! ( I was surprised you could sing so well )…. oh shit!! I’m simply trying to reach him cause he won’t call me back about this solo #HobbsMovie I want you to shoot it just not right now cause the #Fast9 release date has already been announced and we can’t let our loyal fans #FastFamily or our loyal fast and furious FANS down on any level from pushing the date…….. Didn’t you see how HUGE #Fast8 was?? It’s because we announced and KEPT our release date bro….. Call me back DJ I had a great call with your partner Hirum of 7 pounds productions but I’m still trying to reach you… God bless you….. I’m doing this only on behalf of our families so we keep them all in private school…… God bless you good brother!!!! I never ever go public with private family issues…. Once you hit me back I will delete every post….. Love you big bro and I love that Sept 11th post you just up about the families and friends of that horrific tragedy… We do this on behalf of the families, the cast, the crew members who have been down and loyal to us for 15 years…… Everyone matters…… When we shoot we all eat, when we eat we show up as a FAMILY display our love, our funny stuff, our story lines and HEARTS in every frame….. Me and the cast laugh because it seems like #Fast Is like a HOLIDAY at this point…… You can push the release date of a holiday bro… it’s tradition it’s fans that are LOYAL……. We have to show up and service their needs….. Just got out of the hospital still recovering thank you guys for your prayers and love…. I’m a real champion and champions are never down for long…. This is not a #Rant I’m no Rock #Hater and I don’t want his #Life I love my own…… I’m doing this for the #FastFamily I’m loyal and I apologize for being loyal but dammit I am.”

“I never ever go public with private family issues…. Once you hit me back I will delete every post,” wrote Tyrese. Ummm, wut?

Celebrity beefs are so much fun.