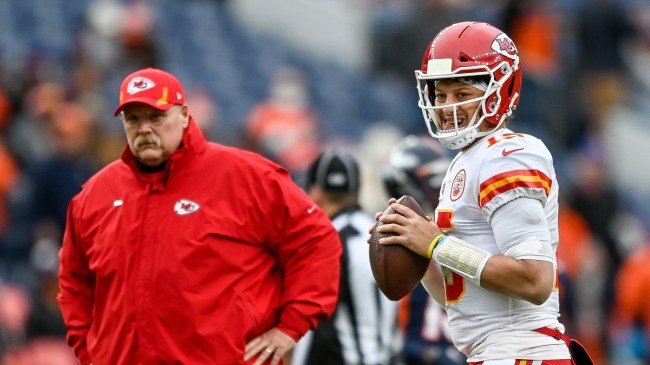 Since taking over as the starting quarterback, Patrick Mahomes has been a superstar for the Kansas City Chiefs. The team has been one of the best in the league, as they’ve been a consistent Super Bowl contender with Mahomes under center. Now, he reveals how the franchise picked him in the 2017 NFL Draft.

During an appearance on New Heights, a podcast hosted by brothers Travis and Jason Kelce, Mahomes goes in depth about his draft night. Apparently, he absolutely loved the draft process with the Chiefs. So much so, that when it came down to it, Patrick Mahomes gave Kansas City a heads-up about when to draft him.

These @PatrickMahomes draft stories are mind-blowing 🤯

THE PATRICK MAHOMES EPISODE with @JasonKelce & @tkelce is out NOW: https://t.co/ZlYmHA5kwB pic.twitter.com/sOW0iLmA6I

Travis Kelce’s face lights up when he learns his superstar quarterback essentially drafted himself to the Chiefs. Not many players do that in the NFL, or at least admit it. Either way, Patrick Mahomes and Kansas City seemed to be a match made in heaven from the jump.

Remember when Sean Payton admitted the New Orleans Saints were going to draft Mahomes? However, the Chiefs traded up to jump ahead of them and take him in the 2017 NFL Draft. Well, turns out Patrick Mahomes is the reason for that after all. At the end of the day, he has clearly made the right decision.