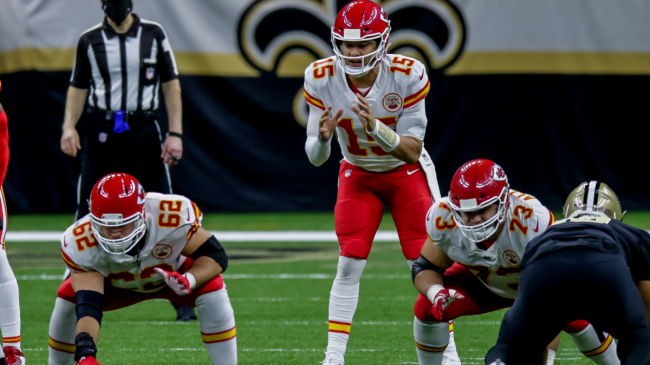 Former Saints head coach Sean Payton had high praise for Patrick Mahomes in a recent interview appearance with Colin Cowherd. In fact, he called him the best he’s ever seen.

Payton talked a little football with the radio host, and not surprisingly, the two got on the topic of quarterbacks. Payton was considered an offensive mastermind when coaching in New Orleans with his Saints twice leading the NFL in scoring. His units ranked first in total offense six times over his 15 seasons with the team, and in the top 10 all but once.

Most of that came with Drew Brees at the helm, but had things gone a bit different, we might’ve seen a few seasons of Mahomes in the Sean Payton offense.

Payton says the Saints nearly drafted the passer out of Texas Tech. Listen to what he had to say in that Colin Cowherd interview.

“[Mahomes] is the best. There’s no argument. I remember scouting him in college. We watched the tape. Obviously in a tougher setting there [at Texas Tech] for him because he doesn’t have the personnel some of these other teams did. After that, we send him two days of installation for a playbook… Took him into a room, spent half a day and he was outstanding.

“Then we go out on the field. We throw, we work out… He reminded me of [Brett] Favre. He could torque his body and he could create speed on the ball without the feet having to be set. So, some of these off-schedule throws he was very good at. I remember when we finished, I said, ‘Look, we’re going right to the plane. We’re not stopping anywhere. No one knows we were here. That’s our next quarterback.'”

Sean Payton talks about evaluation of Patrick Mahomes, lists his only flaw

He then went on to talk about how the Chiefs wound up trading in front of the Saints and selecting Mahomes with the 10th pick of the 2017 NFL Draft. New Orleans got cornerback Marshawn Lattimore at No. 11, which has certainly worked out, too.

Payton went on to say he was the best passer he’s ever evaluated coming out of college. He also noted that there was a large gap between Mahomes and the next best evaluation, but there was one flaw.

“I wrote on my report the only thing I don’t like with this player is the squeaky voice. That was it.”

I think he would’ve gotten past it had he gotten the chance to coach the gunslinger. Instead, it’s the Chiefs who landed Mahomes and it’s already paid off with a Super Bowl.