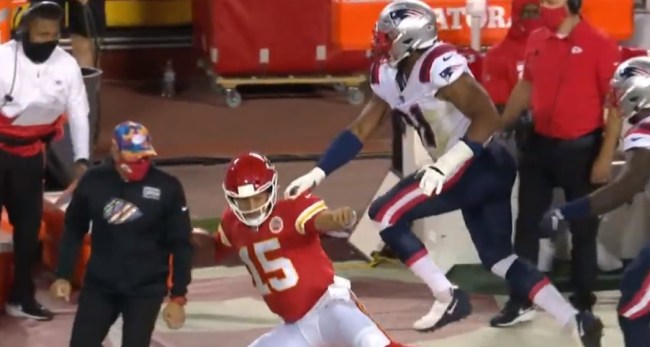 During Monday night’s Pats-Chiefs game, Wise Jr. was called for a penalty for pulling down the Chiefs QB on the sideline which many felt was a flop by Mahomes.

Wise shouldn't have reached out for him, but look at this dude Mahomes flop going down LMAOOOOOOO https://t.co/O4cdygwzGJ pic.twitter.com/8ar0EI9BAm

Despite the fact that Mahomes may have flopped on the play, Matthews called for Wise to get ejected.

Fans immediately fired back at Matthews and called out Mahomes for his flop.

Lmaoo your man was flopping around like a damn fish out there stfu😂😂 https://t.co/h03UqTckME

Agreed, flopping should not be tolerated https://t.co/BZdoU8490b

Lmao look at the fiancée supporting his flop. Girl it was fake, Wise was actually holding him up and barely touching him. But it worked. Don’t worry, refs always got your man. https://t.co/4CYVIXv2z1

Ur boy acted very well there!! Not a foul