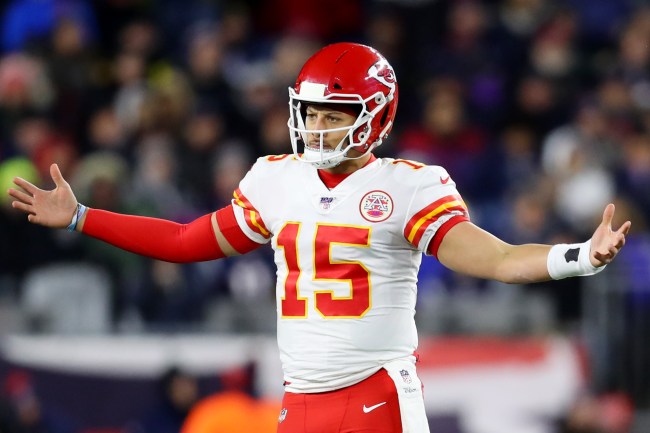 Kansas City Chiefs quarterback Patrick Mahomes is coming off a Super Bowl win but it seems like he still can’t get any respect from his peers.

On Wednesday night, the NFL released the top 10 players of their top 100 list voted by players and Mahomes was listed as #4 behind two other quarterbacks.

Top players in the NFL voted by the players 🍿@brgridiron

Of course NFL fans had some thoughts about Mahomes being ranked 4th in the top 100.

No player in the NFL is better than Patrick Mahomes.

Patrick Mahomes is the youngest player to win both NFL MVP and Super Bowl MVP in NFL history, the fastest player to 9,000+ yards and 75+ TDs in league history and the only QB to lead 3+ double-digit comebacks in the same postseason in NFL history.

Which 3 players are better than Pat Mahomes in the NFL? https://t.co/IROzsfzJWX

Patrick Mahomes the 4th best player in the NFL???????? pic.twitter.com/npY0JThQug

Ohhhh noooo….please don’t give Patrick Mahomes something to prove next season 😈😎 pic.twitter.com/7avYhJgDS4

Such a joke. Explain how when Mahomes was MVP and threw 5k and 50tds, and ACTUALLY WON A PLAYOFF GAME and was number 4. But when Lamar has A WORSE SEASON, he's higher. No excuse for him not being number 1. List just loss it's entire credibility. pic.twitter.com/TNHCzBb7EY