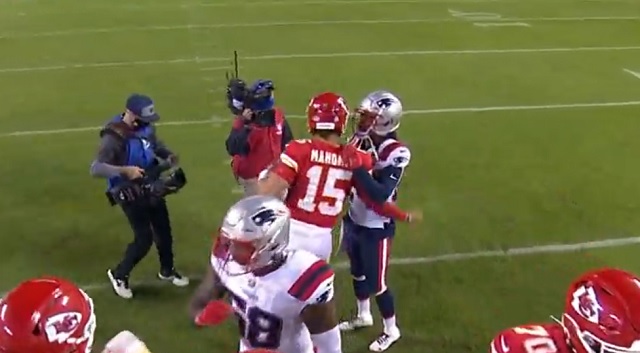 Kansas City Chiefs superstar QB Patrick Mahomes admits he may have made a mistake when he hugged Pats DB Stephon Gilmore on Monday night.

On Wednesday morning it was revealed that Gilmore had tested positive for COVID-19.

#Patriots star CB Stephon Gilmore has tested positive for the coronavirus and the team isn't expected to practice today, per sources.

On Wednesday, Mahomes spoke to the media and says it was a “mental lapse” to hug Gilmore after the game. Mahomes also went on to say that he’s been sleeping in a separate bedroom at home to keep his pregnant fiancé Brittany Matthews safe from contracting COVID-19 just in case.

Patrick Mahomes on with Stephon Gilmore after the game: "You just have to trust in the protocols and the process in place. It was a little bit of a mental lapse."

Patrick Mahomes slept in a separate bedroom and stayed away from his pregnant fiancé since a positive test surfaced within the #chiefs.

As of Wednesday morning, no Chiefs players have tested positive for Coronavirus but that could change in the coming days.

No positive tests today with Chiefs, who played Patriots on Monday night.