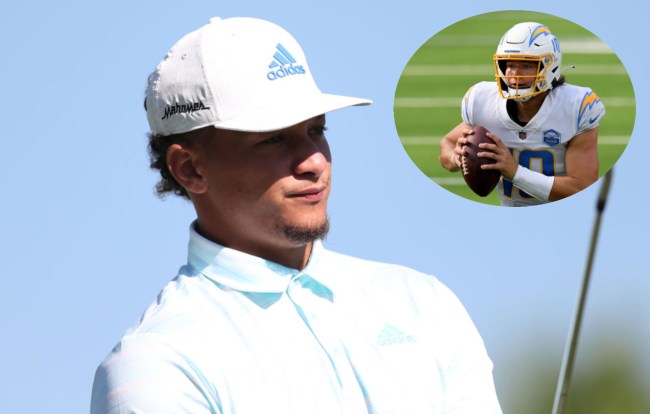 Patrick Mahomes didn’t bring his best stuff when he recently tried to talk a bit of trash about Justin Herbert, and now, he’s walking the whole thing back.

During the American Century Championship playing alongside other athletes and celebrities, a fan chirped at Mahomes saying that he should “watch out for Justin Herbert next year.”

The Chiefs’ QB had a quick response for the fan, but it wasn’t a good one. He responded by saying “I’ll see it when I believe it.” It’s not a great phrase to begin with, but he also mixed up the words, so all around it was a pretty tough look.

Mahomes’ Comments Taken Out Of Context

Mahomes recently spoke with USA Today about what he said about Herbert and said he believes the entire thing is being taken out of context.

“Yeah, I think it got taken out of context,” Mahomes said. “I was talking some trash to all those Raiders and Broncos and Chargers fans out there. I have a ton of respect for [Herbert] as a player.”

I don’t even think you could honestly categorize what he said about Herbert as trash talk. The funniest part of the entire situation is the way he delivered his quick response but completely flipped the phrase.

We’ve all been there and done that before, though. Mahomes certainly isn’t the first person to mix up some words.

Mahomes comes across as a nice, down-to-earth dude and he knows the cameras are on him at all times, so I get why that’s the route he went with when chirping back at the Chargers fan.