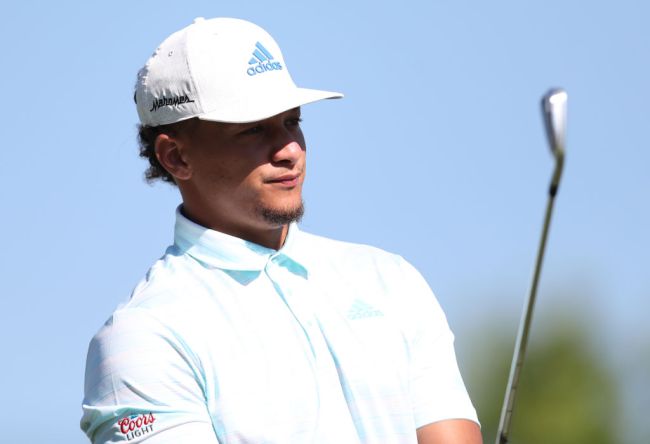 Patrick Mahomes may have inked a record-breaking $503 million contract, he may be a Super Bowl champion and an NFL MVP, but that doesn’t mean he’s a great trash-talker.

Mahomes teed it up in this past week’s American Century Championship alongside other superstar athletes and celebrities. During Sunday’s final round, a fan chirped Mahomes saying that he should “watch out for Justin Herbert next year.”

While Mahomes had a quick response for the fan, it wasn’t a good one. Mahomes responded, saying “I’ll see it when I believe it.”

Not only did he mix up the phrase, but it’s also just an abysmal comeback.

You, me, and anyone else that’s said the phrase “I’ll believe it when I see it” has 100% said it backward, so we can give him a pass on that front, but him saying it in the first place just isn’t good.

Mahomes literally could have hit the fan with a loud ‘Ha!’ and it would’ve been better, but instead he went with a boring phrase and didn’t even deliver it correctly.

Mahomes comes across as a nice, pretty down-to-earth dude and he knows the cameras are on him at all times, so I get why that’s the route he went here, but would it hurt the guy to talk just the tiniest bit of real trash with the cameras locked in on him?

This could’ve been the moment the Mahomes-Herbert rivalry was born, instead, myself and everyone else are laughing at the best QB in the league because he mixed up a few words during a celebrity golf tournament.