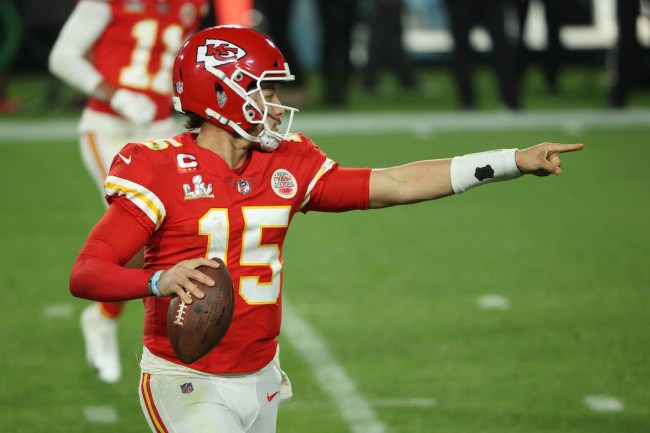 Patrick Mahomes would love to see some NFL rules change to help refs make the right calls and avoid just guessing when trying to determine the spot of the ball. And with so many things in sports moving towards enhanced technology — like trying out robot umpires and goal-line tech in soccer — there may be a real chance that things get updated sooner rather than later.

For those unaware — and I was actually one of those people prior to today — the league actually has a microchip in every one of the footballs used during games. This is to help track data and, sometimes, will be shared publicly through the NFL’s Next Gen Stats. You know, those commercials that come on during every NFL game during the season.

While this has helped understand things to help improve safety, the speed of the game, and all sorts of other cool things — like how hard a pass is being thrown or how fast a receiver’s running — the preexisting chip in footballs also opens up the possibility of helping NFL refs, too. But, for now, the league refuses to allow the tracking data be used to alert the officials when a ball crosses a goal line or is spotted in the correct spot. Patrick Mahomes would like to see that change.

Recently talking to the WHOOP podcast, the Kansas City Chiefs star said he has long supported chips in footballs, and would love to see the technology expand to improve officiating.

“I’ve always thought the chip in the ball has to happen sometime, where if you cross the line, it just tells you a touchdown,” Mahomes said on the WHOOP podcast, via the Kansas City Star. “The biggest thing to me is when they get in the pile by the end zone, there is literally no way to tell if he’s in the end zone or not. It’s like you said, it’s just whatever they call. … I’m sure it’ll happen soon enough.”

Now, this would presumably help NFL refs during games, but it wouldn’t answer the question of whether a player was down prior to the ball either crossing the goal-line for a touchdown or crossing a yardage mark for a first down. That’s always the most difficult part of officiating — getting both of those spots right — which is made more difficult when a player possessing the ball is swarmed around a pile of guys. Even instant replay would make that tough for refs to properly see.

However, knowing the that NFL already has microchips in footballs, it opens up the possibility of the league expanding how that data can be used to improve the game and help refs. Mahomes’ support is for a very specific problem — goal-line scenarios — but there are plenty of other ways to use this type of info to make football better.