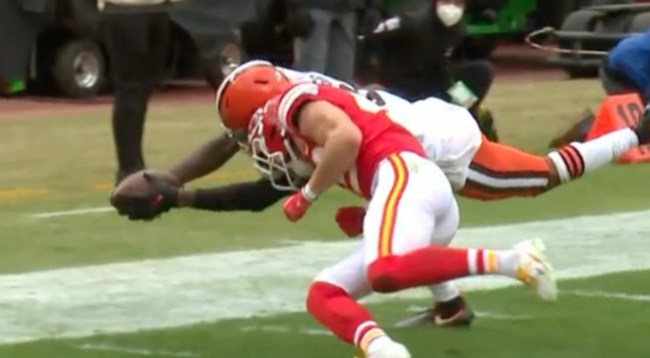 There’s some controversy brewing in the Chiefs-Browns game.

Before the end of the first half, the Cleveland Browns were inches away from scoring a touchdown until Chiefs safety Daniel Sorensen was able to somehow cause Rashard Higgins to fumble the ball out of the end zone which was eventually ruled a touchback.

CBS rules analyst Gene Steratore looked at the play and believes the refs missed a helmet-to-helmet penalty on the Chiefs after Sorensen led with his helmet to hit Higgins.

Gene Steratore says Chiefs should have been flagged for illegal use of the helmet pic.twitter.com/6u3y8yHTEb

It’s not an easy play to officiate in real time especially when you’re dealing with that football, the pylon, the goal line and a fumble. By rule, that’s illegal use of the helmet, I believe.

I've been a firm advocate of making helmet contact reviewable. It's a player safety issue and extremely difficult to officiate consistently in real time. Ruling correctly on plays involving helmet contact actually benefits from the slower speed of replay.https://t.co/0nCHDkxfF1

Browns fans were irate with the non-call.

Refs missed the most obvious helmet to helmet call pic.twitter.com/ImyyBxnSVI

“There will be no helmet to helmet call because it’s the Cleveland #Browns” pic.twitter.com/VZDPTKgXKK

The refs watching a clear helmet to helmet hit on the browns player pic.twitter.com/PnAaXQZw6z

Illegal use of the helmet. The refs just hate the Browns.🤦🏽‍♂️ pic.twitter.com/mW1GHgiPh1

The reason Higgins lost the ball was because he was hit in the helmet…..at the very least, give ball back to offense at original line of scrimmage… or have that a play that can be reviewed. Refs should not miss helmet to helmet #browns @fox8news