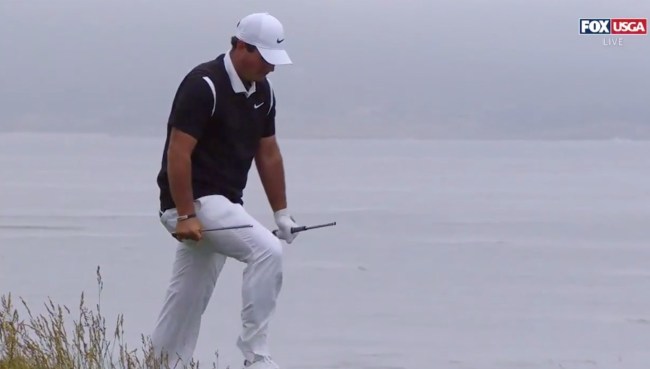 Love him or hate him, Patrick Reed is one of the most entertaining people in golf. During his second-round at the U.S. Open on Friday, Reed kept his entertainment stock high by snapping a wedge over his leg.

The incident happened just off the 18th green after he flubbed a chip. He was even for the tournament at the time before carding a double bogey on his final hole.

Patrick Reed goes full Bo Jackson on his final hole at the US Open. Snap! pic.twitter.com/mcjRNqq5Ry

There’s nothing like a clean break of a golf club. It’s the ultimate snap, honest reaction to what just happened. Nope, absolutely nothing like snapping a piece of metal over the knee.

I think my favorite part of the video is the casual toss he makes with the two pieces. The most savage move would’ve been walking over the edge of the cliff off of the 18th and chunking it into the Pacific Ocean; now THAT would’ve gotten the people really going.

As you can imagine Twitter is having plenty of fun with it.

Has a film noir quality to it… pic.twitter.com/d1mhyWmcJe

Patrick Reed blowing up on 18 and snapping a club over his knee has made my day.

Let’s not overlook the fact that the PGA Tour would immediately bury this footage as deep in the Pacific Ocean as they could sink it — USGA is out here pimping it around. Kudos for embracing #Content (of all kinds) https://t.co/avanwBlMLx

Patrick Reed has completely fallen off the face of the planet since he won the Masters. He flirted at Shinnecock last year for a minute, but that club snap on 18 was the most notable thing he has done all year. Hell, that might be the first time I’ve seen him all year. #USOpen

Double bogey turned out to be all Reed needed on his final hole to make the cut to play the weekend. Hats off to him for hitting his next shot to two feet and tapping in the putt to make the cut.

It’s been a relatively quiet 2019 for Reed thus far as he’s yet to finish inside the Top 10 with his last win coming at the Masters in April of 2018.