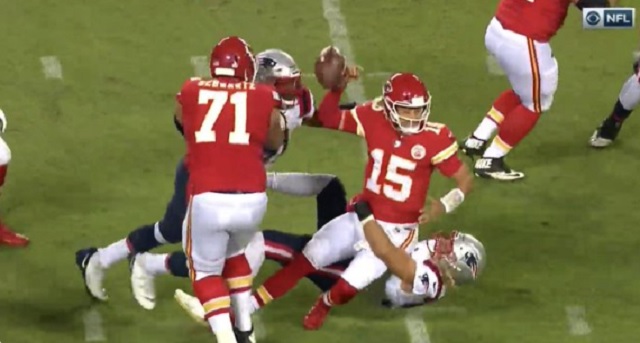 Patrick Mahomes is the NFL’s biggest star and it seems like at this point of his career he’s getting superstar treatment from the refs.

In the second quarter in the Pats’ game against the Kansas City Chiefs on Monday Night, Patriots defensive end Chase Winovich forced a fumble on Mahomes which was then recovered by Shilique Calhoun.

Unfortunately for the Patriots, referees ruled that Mahomes was down and the play would instead be recorded as a sack.

The Chiefs were awarded possession after this play pic.twitter.com/noJyZM5Nb3

Patriots fans were clearly not happy with the call.

They ruled Mahomes was down by contact before the ball came out?WTF? #Patriots getting hosed. pic.twitter.com/aIMMlsXqFd

Back to back years of getting screwed by the refs vs the Chiefs pic.twitter.com/KoU1XwYZ0v

They really said that… Patrick Mahomes was…. down before that ball went out… when he was basically… standing up right…. pic.twitter.com/3Eg9KuGVIb

“Wow an interception on Mahomes! They might take it back for 6!”

It’s really weird to see the Pats on the wrong end of these calls.