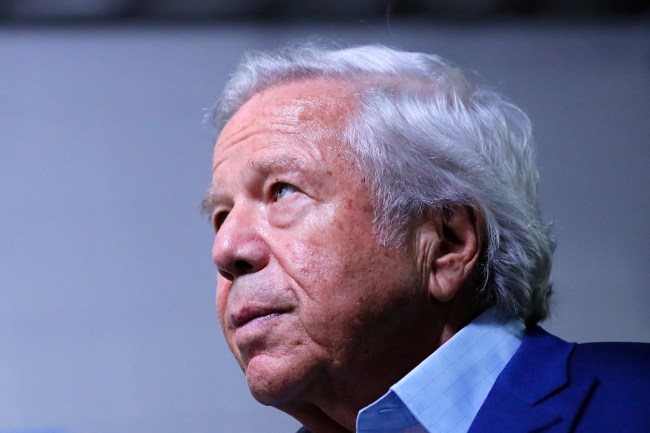 It’s going to be a long few weeks for Patriots owner Robert Kraft.

Early this morning the Jupiter police revealed that Kraft was being charged with two misdemeanor counts of soliciting a prostitute.

Kraft was one of 25 people charged in the case. The rate was $59 for a half hour inside the massage parlor and $79 for an hour.
Kraft is estimated to be worth $6.6 Billion. @CBSMiami

More details: Kraft reportedly visited the Orchard Spa on two occasions. This was part of an eight-month investigation into prostitution and possible sex trafficking involving this spa. Jupiter Police say Kraft is charged with 2 misdemeanors of soliciting a prostitute. @CBSMiami

An "active arrest warrant" has been issued for Kraft, according to Jupiter PD.
Typically, a charge of soliciting results in a pre-trial diversion program where the defendant attends a class on the hazards of prostitution. After which the charge is usually dropped. @CBSMiami

The Jupiter police department claims they have video of Kraft committing the sex acts.

Despite there reportedly being video evidence, Kraft, through a spokesman, categorically denied doing anything “illegal”

Statement from a spokesperson for Robert Kraft:

“We categorically deny that Mr. Kraft engaged in any illegal activity. Because it is a judicial matter, we will not be commenting further.”

We’ll have to wait and see what evidence the police have but it’s not looking good for Kraft as of this moment.