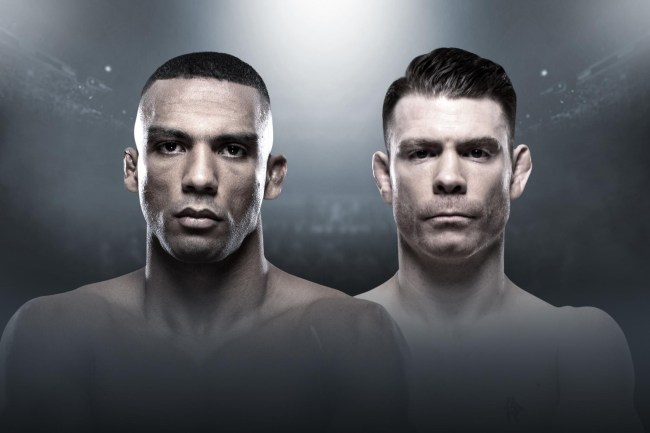 Little known fact about tenth-ranked UFC lightweight Paul “The Irish Dragon” Felder: he was once on an episode of “It’s Always Sunny in Philadelphia.” Another one for the trivia buffs: he’s a trained actor who regularly handles commentary gigs at UFC Fight Night events.

Oh, here’s one more: in just his second UFC bout, Felder burst onto the scene with a hammer of a spinning back fist to knock out Danny Castillo at UFC 182. “Spin to win,” he exclaimed to Joe Rogan during their first in-Octagon interview back in January 2015.

Paul Felder’s always had the potential to be a big-time fighter. He’s a massive lightweight, a complete gamer, and overall, quite likable. Two of those attributes will come in handy when he faces Edson Barboza in the co-main event of the big UFC 242 Pay Per View main card on ESPN+.

Hailing from Philadelphia, Pennsylvania, home of Rocky Balboa, Joe Frazier, and Kevin Bacon, Felder maybe six degrees from a UFC title, but he’s one degree from Barboza. Their fight on the UFC 242 PPV is actually a rematch from 2015 when Felder took a huge step up to face Barboza at a time when no one wanted to fight one of MMA’s most feared strikers.

Felder was eager to make a big statement by that point; for years before he finally made it to the UFC, he had trouble finding opponents of his own.

Stuck on the northeast regional scene, Felder smoked everyone on the local circuit. He was so dominant that promoters had difficulty matching him up against anyone, and without the proper dance partner, he was unable to break into the big leagues.

All of that changed eventually, thanks to an affiliation with UFC sensation Donald “Cowboy” Cerrone, and a stunning head kick that caught the attention of the UFC matchmakers. Felder was finally fighting in the Octagon, and he wasted no time making a huge impression.

Following the aforementioned spinning back fist win over Castillo, which earned Felder his first of four fight-night bonuses, “The Irish Dragon” stepped in to face Barboza. The bout didn’t exactly go to plan, as Felder walked away with his first professional loss. The $50,000 Fight of the Night bonus didn’t hurt, but for any fighter, a loss is extremely difficult to handle, let alone the first one.

Things didn’t get much better from there, as Felder dropped another decision just a few months later, this time to Ross Pearson.

Avoiding a third-straight loss, Felder started to find his way in 2016. Rather than rushing into the title picture to make up for those years he spent struggling in local shows, he took a slower approach to the top-10, taking fights that were offered, rather than stepping in on short notice against bigger names.

Felder won five of six bouts in 2016 and 2017, and the only loss came as a result of a doctor’s stoppage. I mean, what type of way is that to lose anyway?

In those years, Felder not only made his cameo on “Always Sunny …” alongside “Cowboy” Cerrone, but he relocated to the Roufusport gym in Milwaukee, where he completely refined and transformed his game. He found his nasty elbows and wicked ground and pound buried underneath years of technical kickboxing expertise. The results produced a sharper and more violent Felder.

Continuing his run towards the lightweight title, Felder scored the biggest win of his career earlier this year, when he took a unanimous decision over James Vick in February. It was Felder’s return to lightweight after he gave the fans what they wanted and fought Mike “Platinum” Perry at welterweight.

The Perry fight didn’t go Felder’s way, but it was one of those cases of winning in the court of public opinion despite losing on the judges scorecards. He also won in the eyes of UFC matchmakers, doing them a solid by stepping up for a big fight during International Fight Week, just months after the Conor McGregor dolly incident that rocked the sports world, along with a weight cutting mishap, derailed a fight he had scheduled at UFC 223.

Set to face Al Iaquinta on the main card of the Khabib vs. Holloway PPV, Felder was pulled from the card after Holloway was unable to continue cutting weight. With a number of fighters injured from the dolly attack — in case you’ve forgotten, Conor McGregor threw a moving dolly into a bus window as a way to taunt and intimidate Khabib Nurmagomedov — there was some movement around the lightweight pairings. Iaquinta was eventually given the title shot, even though Felder was the one who made the 155-pound championship limit. The whole thing was a mess, really.

All of this is to say that Paul Felder is now coming full circle as he attempts to avenge his first career loss when he fights Edson Barboza on the UFC 242 Pay Per View on ESPN+ on September 7.

The whole rematch thing will be new for both Felder and Barboza, as neither has ever faced an MMA opponent twice. And while the names are the same, don’t expect this to be the same fight as the one Felder and Barboza engaged in Chicago in 2015.

Instead, expect a much wiser and more patient Paul Felder who uses more facets of mixed martial arts than his exceptional kicking game. Expect a Paul Felder who knows when to strike and when to clinch, when to wrestle and when to disengage and go back to his kickboxing.

Expect a Paul Felder who isn’t afraid to take risks, and a Paul Felder who tries to use his size and strength in the pocket more than his head movement in kicking range. Expect all of these things and more because Paul Felder routinely delivers one hell of an MMA fight, and there’s no reason to believe that his rematch against Edson Barboza in the UFC 242 Pay Per View main card on ESPN+ will be anything less than fireworks.