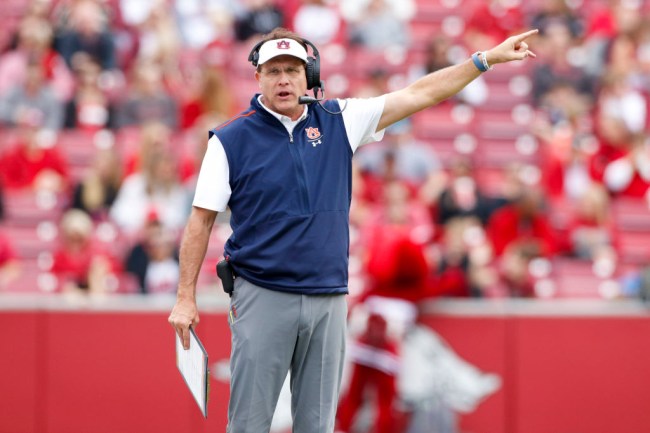 Each and every season since his Auburn Tigers lost in the 2014 national championship game to Florida State, the rumors of Gus Malzahn being on the hot seat, possibly being fired or leaving Auburn have been abundant.

Paul Finebaum has been one of the many media members that have criticized Malzahn over the years and following Auburn’s 21-14 home loss to Georgia on Saturday he gave his honest take about Malzahn’s future with WJOX-FM, specifically if Auburn falls to a Tua Tagovailoa-less Alabama team in the Iron Bowl.

“This Iron Bowl now sets up in a strange way. Instead of Auburn hosting the No. 1, 2 or 3 team in the country with the best quarterback, they host a team that is really sideways without its star quarterback and the perception now is if Gus Malzahn can’t beat this Alabama team at home, what Alabama team is he going to beat.”

Listen, we can whisper this, or we can scream it at the top of our lungs, if Gus Malzahn finishes the season 8-4, the appetite for him to return is going to be fairly muted at Auburn,” Finebaum said. “It will be below 50 percent. Gus Malzahn needs to leave. He needs to find somewhere else to go because he can continue, it’s like if you keep banging your head against the wall, you’re still going to get the same result. You’re going to have a headache and you’re going to feel terrible.”

Since losing to Florida State in that 2014 title game, Malzahn has posted just one 10-win regular-season record and a 2-4 bowl record. The Tigers will need to beat Alabama to get to eight regular-season wins this year. He also took Auburn to the SEC championship game again in 2017 where the Tigers lost to Georgia.

Malzahn has been linked for a couple of years now to the Arkansas job, which just became open yet again as the Razorbacks parted ways with Chad Morris. Malzahn is an Arkansas native, but going from one SEC West school to another SEC West school, that’s in far worse shape than Auburn, would be a shocking move.

If he’s fired from Auburn, however, it wouldn’t be as surprising to see him wearing a red and white polo next year.

Perhaps the biggest measuring mark for Auburn fans and any head coach is their record against the Crimson Tide and Malzahn has gone just 2-4 against Alabama since arriving on the scene.

From an Auburn standpoint, however, if Malzahn does indeed leave or if he’s let go, is there a clear-cut coaching candidate that would take Tigers over the edge in the hardest division in all of college football?