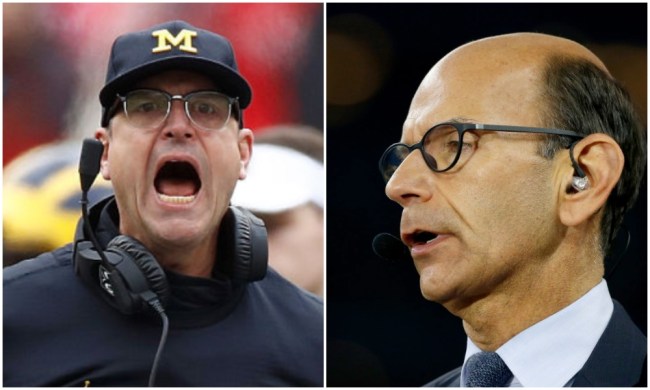 Paul Finebaum shares the same opinion that most Michigan football fans seem to have about Jim Harbaugh at the moment, which is that the Wolverines head coach should be fired.

Michigan football is in a bad place. While the Wolverines haven’t been close to the peak of the college football world in quite some time, not many predicted Michigan to be 2-4 with losses to Wisconsin, Michigan State, Indiana, and a bad Penn State team six games into the wonky 2020 season, but here we are.

On top of all that, and probably most importantly, Harbaugh is 0-5 against Ohio State since arriving at Michigan and every single sign imaginable points to that record moving to 0-6 this weekend if ‘The Game’ is played.

Harbaugh could very well be coaching for his job against Ohio State, but Michigan is likely going to get embarrassed by the Buckeyes, who are favored by 29 points. While a win over Ohio State would shock the world and perhaps give a little hope to Wolverine fans regarding Harbaugh’s future in Ann Arbor, Paul Finebaum doesn’t even think an upset over a bitter rival should push Michigan to hang onto him.

“I don’t think this game is going to determine anything,” Finebaum said on ESPN’s ‘Get Up’ on Tuesday. “I really feel like he’s already expired his opportunities. This year has been a complete bust. He is not going to beat Ohio State.

“I don’t see how he does it, and I’m not sure if that’s going to determine the outcome (of his job). To me, the outcome should already be determined.”

“In my opinion, it should be done,” he said. “In (Michigan’s) opinion right now, there’s a lot of reporting out of Detroit that the athletic director and Harbaugh are trying to work out some deal to lessen his contract and lessen the buyout going into the final year. That’s a waste of time. He’s a lame duck right now. Everyone realizes that he is probably not going to be there much longer. Why would you allow him to come back?”

"Let him get an NFL job … and end this charade that Jim Harbaugh is ever going to turn Michigan around. He is not!" pic.twitter.com/3MFrLwUFR6

There have been reports suggesting that perhaps if Harbaugh and Michigan part ways then he should return to the NFL. Harbaugh went 44-19 in four seasons as the 49ers head coach and led the team to a Super Bowl appearance in 2012.