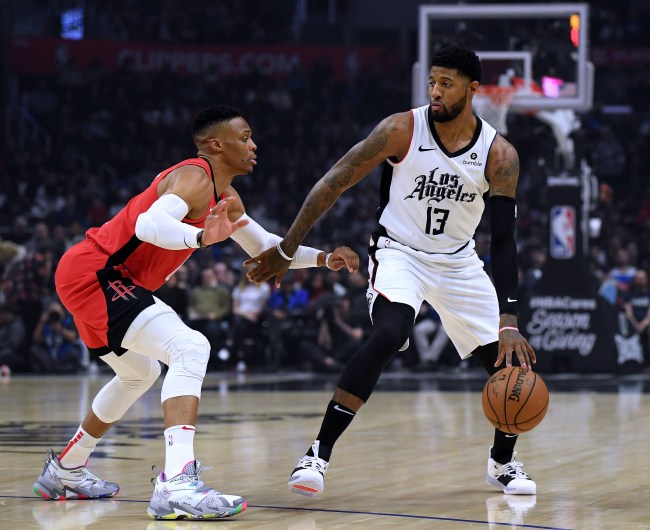 NBA trade season is quickly approaching and with an abbreviated offseason, the rumors are starting to heat up.

Earlier in the week, it was revealed that Rockets star Russell Westbrook had requested a trade from the team for various reasons including not wanting to play alongside James Harden anymore.

According to the latest trade rumor the Rockets are reportedly in preliminary talks to trade Westbrook to the Clippers for Paul George and a high draft pick.

According to @ScoopB, there have been preliminary trade talks between the Rockets/Clippers about a huge trade;

The trade makes sense considering the Clippers are trying to shake things up after their embarrassing playoff loss to the Nuggets and Westbrook has reportedly put the Clippers as one of his preferred destinations to be traded to.

Lakers, Clippers, Heat, Bucks, and Knicks are among potential destinations if Russell Westbrook wants out of Houston, per @BobbyMarks42. pic.twitter.com/TSw6NLZNQ0

NBA fans thought it was funny that the Clippers were potentially trying to dump Paul George after one season.

Kawhi chose paul George over the lakers and lebron just to watch pg get traded a month after the lakers finals win pic.twitter.com/8XXfjcGKNz

Funny part about it is Paul George gathered the Clips team after they had one of the biggest chokes in NBA history and told them that they had to stay committed. To stay together and chase a ring again next year……. AND NOW THAT MAN IS FIRST IN LINE TO GET TRADED! pic.twitter.com/lAUI4IFO4b

Kawhi asked the Lakers for a private jet to sign, went to the Clippers after being denied, demanded them to trade for Paul George before he agreed to go, then “okays” a trade to send George to Houston after just one season for Westbrook. Thought Bron was the GM? 🤣