NBA Fans Mock Paul Pierce After He Said Players Today Are Scared Of LeBron James ‘My Era Is Out The League, We Weren’t Afraid Of LeBron’ 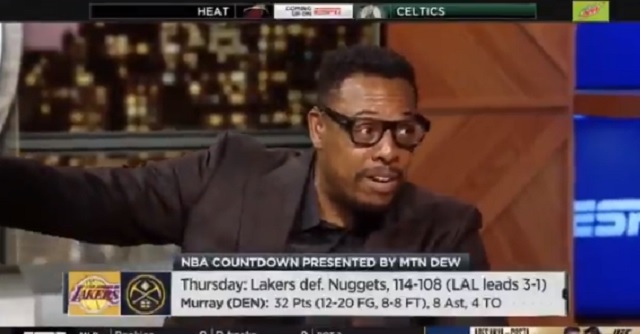 Paul Pierce has once again drawn the ire of NBA fans for making negative comments about LeBron James.

After the Lakers took a commanding 3-1 series lead against the Nuggets, Pierce went on a tirade about how teams these days are afraid of LeBron unlike his Celtics team of the 2010’s.

"My era is out the league, we weren’t afraid of LeBron."

Pierce, once said he wouldn’t put LeBron in his all-time top 5, was immediately mocked by NBA fans for his take.

"My era is out the league, we weren’t afraid of LeBron."

LeBron dominated this man. He didn't always beat his team. But LeBron James beat the shit out of Paul Pierce and he couldn't do shit to stop him. https://t.co/u0I9b3DfoS

Paul Pierce’s two main roles on ESPN are to:

1. Wear bad suits
2. Remind us that his Celtics teams eliminated the Cavs twice

This man was hella scared of LeBron. Paul Pierce is delusional 😂 https://t.co/Ck2ag9QBFU

Guy talks like he ran the Eastern Conference for a decade

I am so tired of Paul Pierce thinking that him and lebron had this amazing rivalry. He was not even remotely in the same stratosphere as lebron. Glad to know bron is living absolutely rent free in Pierce’s head though. https://t.co/exwU56buPu