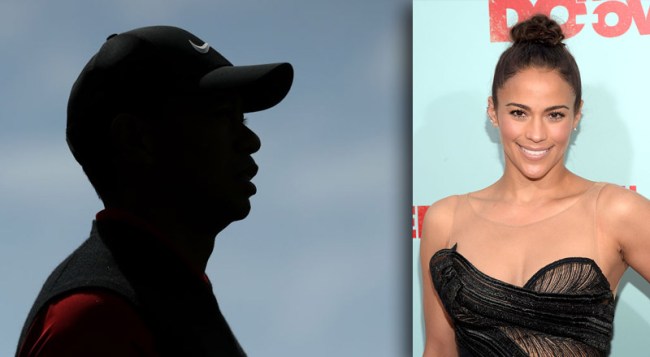 You guys know who actress Paula Patton is, right? She’s been in movies like The Do-Over, Warcraft, and Mission: Impossible – Ghost Protocol. She was also married to singer Robin Thicke, who she had been with for 21 years, nine years of which as husband and wife until they got divorced in 2015.

Anyway, Patton is now the producer and star of a new suspense thriller called Traffik which was released on April 20th. As such, she was out giving promotional interviews and during one of them with Shadow and Act Patton revealed that she wants to play Tiger Woods in a biopic of his life and explained why she’d like to do such a thing.

For Paula Patton, producer and star of the new suspense thriller Traffik, gender-bending isn’t off the table when it comes to her dream role. The actress reveals that, as unconventional as it would be, she would love to play star athlete Tiger Woods in a biopic. She explains, “I don’t see why a woman can’t play a man and I think that he’s an interesting character. Back when he was in his prime, obviously he had his demons. He was a conflicted person. He was great at some things and yet he had these flaws. He must have had to put on quite a facade and was probably hiding a lot of pain. Characters like that are very interesting to play.”

Though she is also multiracial like the sports legend, that part of her identity means something different to her than it apparently does for Woods. “Well, that’s where we part ways, I guess,” she says. “I’ve always identified as being black. Period.” Pushed to consider her identity in the context of the zeitgeist, she did allow that, “Yes, my mind is more open because we live in a more gender fluid, sexually-fluid time, so I am open to considering, why should I deny all the things that I am (including my racial identity). I am questioning a lot of things right now so my mind is open to that. Maybe, maybe.”

Not sure what Tiger would think of that, but I like it. This needs to happen.

Hey, if Cate Blanchett can earn an Academy Award nomination for playing Bob Dylan in I’m Not There, why couldn’t Patton play Tiger Woods in a movie about his life?