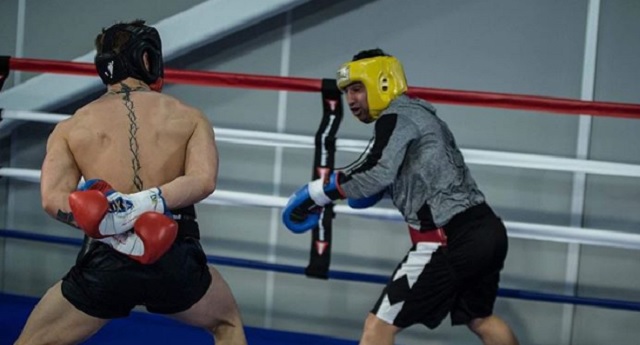 Former boxing champ Paulie Malignaggi is starting to spill the beans about his sparring session with Conor McGregor last week and it seems like Paulie wasn’t entirely impressed with Conor’s punching power.

According to Malignaggi, McGregor doesn’t have “Oh my God” power” and it’s clear that the UFC’s star’s punches aren’t “what the reputation holds it for”.

The former boxing champ did go on to say that McGregor’s awkwardness may cause trouble for Mayweather in the ring,

“The way I described this is he knows what he wants to do and he has a method to the mayhem. And the work was good, the work was rough, the work was good. We did 8 hard rounds. We were supposed to do 6, we ended up going 8. I think some of it had to do with the bad blood for maybe he had for some of the talking trash that I did, but we did go pretty good, and he showed me at least he is serious about this.

“I can’t say based on a sparring session, oh I’m going to pick this guy to win the fight. But I will say this, he’s serious about what he wants to do. He has an awkwardness to where he can land some shots,

The McGregor-Mayweather fight is now less than a month away, we’ll see if Conor can actually pull it off.