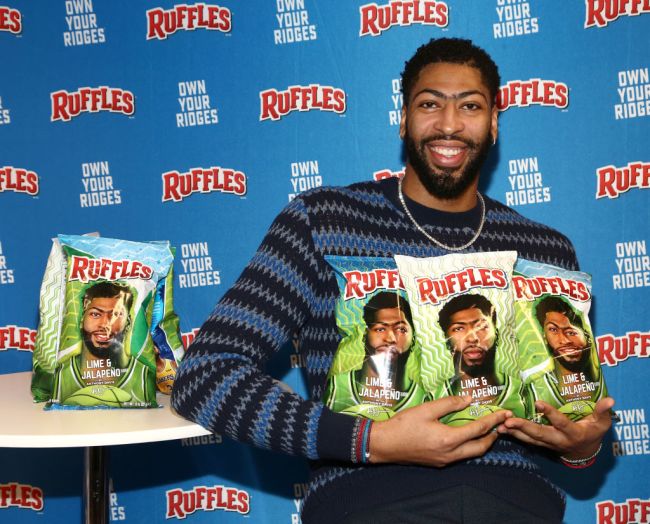 Pelicans fans still hate Anthony Davis after he left them high and dry for the Lakers.

Back in 2019, Davis forced his way out of New Orleans to get himself traded to Los Angeles so he could team up with LeBron James. During his final game in New Orleans, Davis appeared to troll Pelicans fans with a shirt that read “that’s all folks.”

Anthony Davis is wearing a shirt reading "That's All Folks!" to the arena in what is likely his last game with the Pelicans 🙃 pic.twitter.com/dN5a0OTwsi

Even though it’s been two years since AD has been with the Lakers, Pelicans fans are still bitter about the situation. Before the arrival of Hurricane Ida in New Orleans on Sunday, one Pelicans fan noticed that all the chips at his local store had been bought except for the Ruffles chips that featured Davis on the cover.

⁦⁩Every chip on the aisle goes before anyone wants ⁦@AntDavis23⁩ trash ruffles. People would literally rather starve in this hurricane😂😂😂. ⁦@ProPelsTalk⁩ pic.twitter.com/bPG7yHtSMg

The Internet was impressed by the level of pettiness from Pelicans fans.

Even with all the chips gone Lousiana folks still holding a grudge against AD.

Nobody does petty better than New Orleans https://t.co/bBaC6nnt7g

Even in the worst of times, Louisiana stays petty. Gotta love it 😂😂 https://t.co/BnOSbpEIT3

Grade-A petty. Stick it in my veins. https://t.co/8ru7zFEOjZ