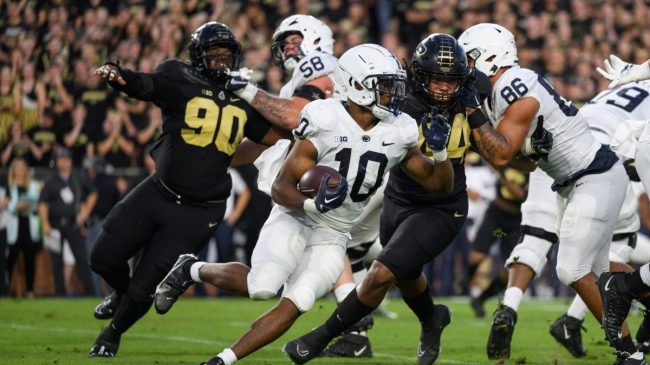 The Penn State Nittany Lions’ run game has been a borderline disaster for the better part of the last two seasons. It’s a big reason the Penn State offense has sputtered each of those seasons and the team is just 11-11 since 2020.

Cain and Holmes have since transferred. The former is at LSU and the latter at Florida State, ironically.

Penn State coach James Franklin is looking for a difference-maker at the position in 2022. He may have just found one.

Nick Singleton was the top-rated running back in the country in 2022 according to 247Sports. The 6-foot, 210-pound back committed to the Nittany Lions over Notre Dame and Ohio State among a host of other offers.

Singleton impressed in both spring and summer practice and split reps with Lee and fellow freshman Kaytron Allen in week one.

That rotation continued in week two against Ohio, but Singleton may have laid claim to the job with this ridiculous 70-yard touchdown run.

Get to know the name, B1G fans: Nick Singleton.

Penn State fans wasted no time crowning him as RB1 after the play.

I think Penn State has found their future at running back.

Nick Singleton was the #1 running back in the ‘22 class for a reason
pic.twitter.com/uSdE2RDGYf

Are we actually seeing James Franklin accept the fact that Nick Singleton should be the #1 RB?

How about #PennState just makes Nick Singleton the feature back, shall we? pic.twitter.com/MYHw3li8cv

Former Penn State and current New York Giants running back Saquon Barkley took one game before laying claim to the starting job for the Nittany Lions. It appears Singleton may be on the same path.