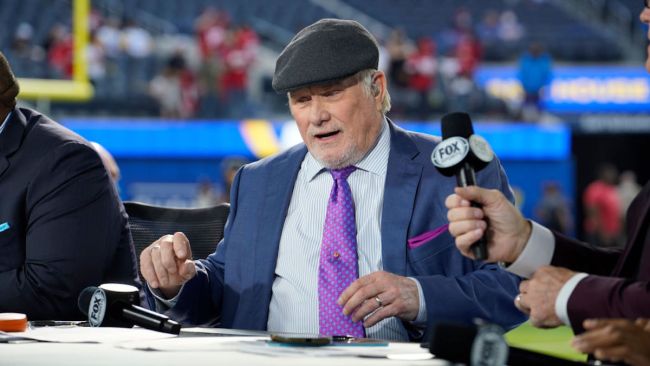 Terry Bradshaw, the four-time Super Bowl champion who has been working as an NFL analyst for Fox Sports since 1994, was trending on Twitter on Sunday evening following a difficult day on-air for the 74-year-old which many fans seemed to notice.

Similar to the conversation surrounding 87-year-old Lee Corso on ESPN’s famed traveling college football show College Gameday, some football fans took to Twitter to share their opinion about Bradshaw’s state following appearances on Fox’s pregame and postgame shows. Granted, some fans were far more delicate in their views than others.

Terry Bradshaw is having major problems in the post game show on @NFLonFOX It may be time for him to retire from broadcasting. Had to turn it off he was messing up so much.

Terry Bradshaw is slurring his words out there. It’s embarrassing.

Terry Bradshaw just made a whole lot of noises, but I'm not sure any of them were actual words.

Is a 29-person studio crew really necessary at this point, Fox? It hasn't been entertaining in 15 years.

If we’re forcing Lee Corso out, Terry Bradshaw needs to go also, or at the very least stop doing highlights. Dude is trash. These NFL talking heads are mostly trash and past their prime.

Someone check on terry bradshaw, he doesn’t look ok

“Not trying to be insensitive but there are some sports analysts who were great in their prime, but it’s now time to retire… love them all but it’s time to move on,” one user stated as he listed Bradshaw alongside Gameday’s Lee Corso and ESPN’s Chris Mortensen.

Not trying to be insensitive but there are some sports analysts who were great in their prime, but it’s now time to retire and move on.
– Lee Corso – College Gameday
– Terry Bradshaw – Fox NFL Sunday
– Chris Mortensen – Sunday NFL Countdown
Love them all but it’s time to move on

Continuing to put Terry Bradshaw on coverage is elder abuse

One Twitter user suggested that it’s “obvious” his longtime co-workers are “covering” for some of his apparent “memory lapses”:

@NFLonFOX is @terry_bradshaw_ok? I work with older people with early onset Alzheimers and he’s showing some of those signs. It’s obvious @curtmenefee @michaelstrahan Howie Long @JimmieJohnson are covering some of those memory lapses, but they are really starting to show.

A few years ago, during an interview with Men’s Journal, Bradshaw expressed “insecurity” about how much longer he’ll be able to do this job:

“I’m 73. There’s a part of me that says, ‘How long can you do television?’ “There’s a bit of insecurity there. But I’m not through, I can tell you that. I live to entertain,” Bradshaw said to Men’s Journal back in 2021.

During his 13-year NFL career, all of which were with the Pittsburgh Steelers, Bradshaw won four Super Bowls (including two Super Bowl MVPs), was a one-time first-team All-Pro member, three-time Pro Bowler, and led the NFL in touchdown passes twice (1978 and 1982). In total, Bradshaw passed for 27,989 yards, 212 touchdowns, and 210 interceptions.