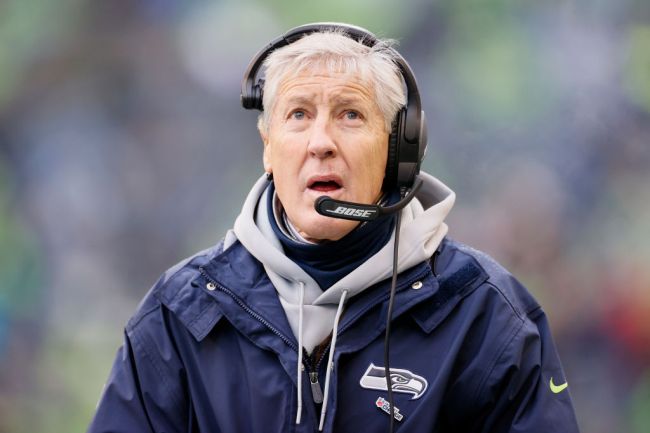 The Seattle Seahawks are hosting football’s most uninspiring quarterback competition this offseason. They have to choose between Geno Smith, who went 1-2 as the team’s starter last season and is 13-21 as a starter in his career, or Drew Lock, who was replaced after his first season starting for the Broncos.

Drew Lock got some brief work with the Seahawks’ No. 1 offense early in today’s practice. Pete Carroll said Geno Smith continues to lead that battle but seemed to hint that Lock will get more first-team reps in tomorrow’s mock game. “It’ll be a really big day tomorrow.” pic.twitter.com/nayrsMd2NO

“Geno continues to be on top, he’s ahead, he’s been in the lead for all the obvious reasons, and he’s holding onto it and doing a really good job of battling. Both guys are communicating beautifully, they’re learning well, we don’t have any issues with anything we’re trying to do. There are no issues here where we have to ‘Oh, we can’t quite do this or that with this guy or that guy,’ it isn’t like that. They’re very talented arm-wise, and the ability to throw the ball down the field is there. So, let the games begin. Getting out there, now we’re in the middle of it, and we’ll see what happens. It’s a really big day tomorrow. It’ll be a really big day tomorrow.”

Caroll also discussed the things Smith is doing right so far to keep him ahead of Lock.

“He’s just doing things right,” Carroll said. “He handles the system, he’s making the checks at the line of scrimmage, he’s able to control the protections and working with [center] Austin [Blythe], those guys are hitting it really well, and he’s just really talented. He’s made great throws every day. I’m still looking for them to really come in, and really own it, and put days together where they don’t have any negative plays, the plays that they wish they had back. So, in a sense, there’s been openings for both guys by not having the complete day, getting everything done, and finishing the day close to perfect.”

With just a week until the Seattle Seahawks begin their preseason, it sounds like Geno Smith has an edge for the QB1 spot against the Pittsburgh Steelers next weekend.