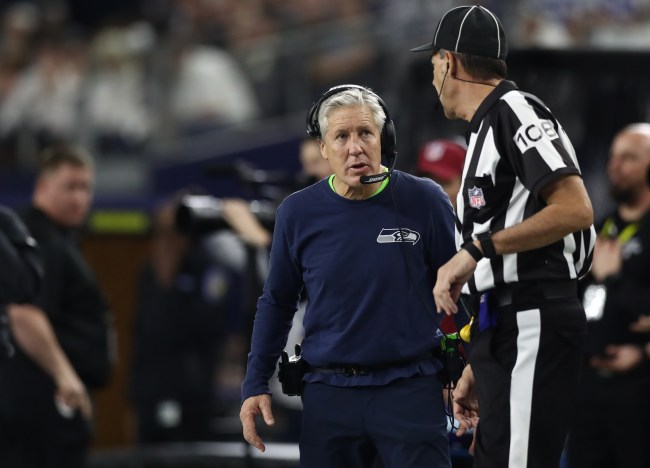 Pete Carroll is one of the best head coaches in the NFL, having won one Super Bowl with the Seattle Seahawks, and just missing out on another the following season. With that type of success, one would think that he’d be all for improving the game by making sure things are correctly called, right? Well, not so fast, because Carroll gave an interesting hot take about NFL’s instant replay, and it’s actually opposite what you might think it’d be.

That’s because Pete Carroll said that he would “get rid of” NFL instant replay altogether, meaning all those calls that may have been missed or wrong initially, but reversed because of further review, could have impacted the outcome of a game. Doesn’t matter to Carroll, though, because here’s what he told Peter King of Pro Football Talk.

“Get rid of—or at least decrease the use of—instant replay. I get all the reasons why we have instant replay, and technology has opened up a new world for us to get to this point. But I miss the human element of trusting the officials to make the calls in the moment and then the rest of us having to live with what they called. It was both fun and frustrating, but I really liked the game better when the officials were just as much a part of the game as the players.”

This definitely isn’t something most NFL fans would agree with — especially those in New Orleans who are probably still fuming at the missed pass interference call in the NFC Championship Game last season. That said, Pete Carroll’s suggestion is something that does make sense, because human error is part of sports, but not when there’s already a tried and true system in place like replay intact.

Carroll’s response came after King asked 25 people around the NFL to give suggestions on how to improve the sport. While the Seahawks’ head coach was all about killing replay, unsurprisingly, Fox officiating analyst Dean Blandino went in the complete opposite direction, going as far as saying that he thinks every play should be reviewable.

“I have come full circle on this since I worked in the league, but I now think coaches should be able to challenge anything they want. Don’t increase the number of challenges. Put the onus on the coach to save his challenges. This would simplify the rule because you wouldn’t have to wonder what’s reviewable and what isn’t.

“Now that the league has added pass-interference to reviewable calls, we’re going to see the creep begin. Next year, they’ll add something else. By not opening it up to all things being reviewable, all we are doing is delaying the inevitable.”

Blandino’s suggestion seems most likely to make fans, players and coaches happy, because, in reference to that aforementioned NFC Championship Game, since the play couldn’t legally be reviewed, the refs missed it and, presumably, cost the Saints the chance at a Super Bowl.

Pete Carroll may want to end the NFL’s instant replay, but, given its popularity and success in getting the calls right, for the most part, there’s almost no way in hell the league’s getting rid of it.