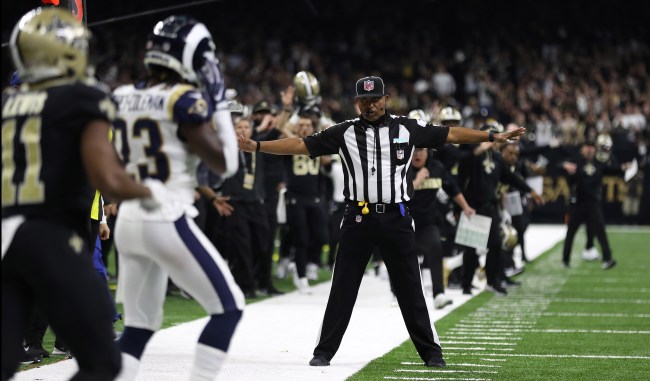 Poor Saints fans. The sports trauma they’ve had to endure over the last week has been monumental. I am convinced that they will never, ever get over the egregious non-pass interference/helmet-to-helmet/faceguarding call that cost their team a trip to Super Bowl LIII.

Of course, it doesn’t help that after the game Saints coach (at least for now) Sean Payton said the NFL told him the referees screwed up. Or the fact that Rams DB Nickell Robey-Coleman admitted he fully expected a flag on the play – because he did it on purpose to save a touchdown.

ORRRRRR… the fact that the NFL just handed down a $26,739 fine on Robey-Coleman for the helmet-to-helmet hit on that very play!

You can’t make this stuff up, folks.

This coming only a few hours after Saints tight end Benjamin Watson pleaded with NFL commissioner Roger Goodell to publicly make a statement admitting the referees completely botched the call – or non-call as the case may be – which he still has not done.

“NFL made an unofficial statement on the hit that Rams’ CB Nickell Robey-Coleman delivered on Saints’ WR Tommylee Lewis,” Adam Schefter wrote on Twitter. “NFL fined Robey-Coleman the amount of $26,739 for the helmet-to-helmet that was not flagged during the NFC Championship Game, per source.”

NFL made an unofficial statement on the hit that Rams' CB Nickell Robey-Coleman delivered on Saints' WR Tommylee Lewis.

NFL fined Robey-Coleman the amount of $26,739 for the helmet-to-helmet that was not flagged during the NFC Championship Game, per source.

Needless to say, Saints fans (as well as many other NFL fans) are understandably upset all over again.

How much were the officials fined?

That should ease the pain for saints fans.

Sarcasm at its finest.

So there should have been two flags on the play huh, I see

So… their response is to pay themselves nearly $27k out of Robey-Coleman’s pocket. Smh. 🤦🏻‍♂️

this week gets worse and worse

somehow this is worse than not even addressing it

What good is that? It’s after the fact!!! The league should be ashamed of themselves….. Super Bowl with*

Pay attention corners. For only 26k, you can also book a trip to the superbowl