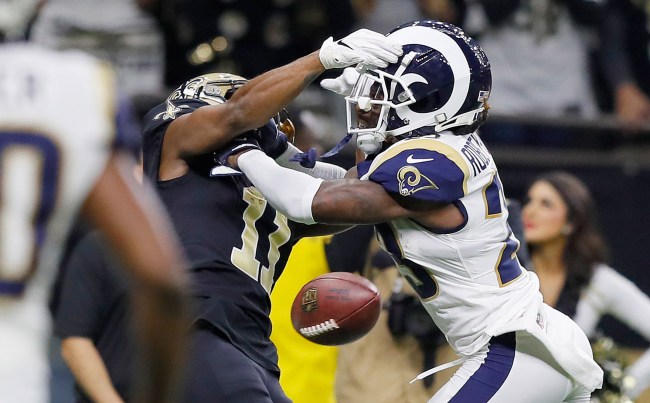 If you thought the non-call on Rams DB Nickell Robey-Coleman committing pass interference/helmet-to-helmet/faceguarding at the end of the NFC Championship was bad, wait til you see this alternate angle from the stands.

According to CBS SportsLine, the Saints would have had a 98% probability of winning the NFC Championship if pass interference (or any of those other penalties) were called against Robey-Coleman.

Even he admitted he committed a foul… because he DID IT ON PURPOSE, according to none other than NFL.com.

“Yes, I got there too early,” Robey-Coleman said afterward, per The MMQB’s Robert Klemko. “I was beat, and I was trying to save the touchdown.”

“I thought it was for a split-second; but the ref got up — when I got up, he said ‘incomplete,’ so I just was like, ‘Thank you,'” Robey-Coleman said, per ESPN.com. “I didn’t look back at the ball. I didn’t play the ball. If I had played the ball, then it would’ve been a different story. But since I just went straight to him — and when I seen his hands go up and I hit him, I just heard the crowd go crazy and I was like, ‘Aw, this is a flag.’ And I got up and he said incomplete, I was like, ‘Ah!’ And then the ref said, like, it looked it was a tip. Like, it was, like, tipped. So I was like, ‘OK, cool.'”

In the pool report transcript after the game, referee Bill Vinovich said he did not see the play.

Fine. But you know who did see the play? The two NFL officials standing less than 20 feet away from it, as captured by a fan in the stands showing an alternate angle of the play.

I’ll take that L but come on @nfl y’all got some explaining to do, this game was to big to miss such an obvious call with not 1 but 2 refs standing right there! Smh WHO DAT for life…..By the way @rams you definitely can’t say the crowd didn’t make a difference! Ref 13 and Ref 60 y’all blew that call!

Just… wow. I thought the missed call was bad before, but that was just an egregious display of incompetence right there.

Michael Thomas is right. I’m not even a Saints fan. Unlike in the AFC Championship game, I had no rooting interest in the game, but Roger Goodell really should step in and take the unprecedented step of using his commissioner powers to fix this.