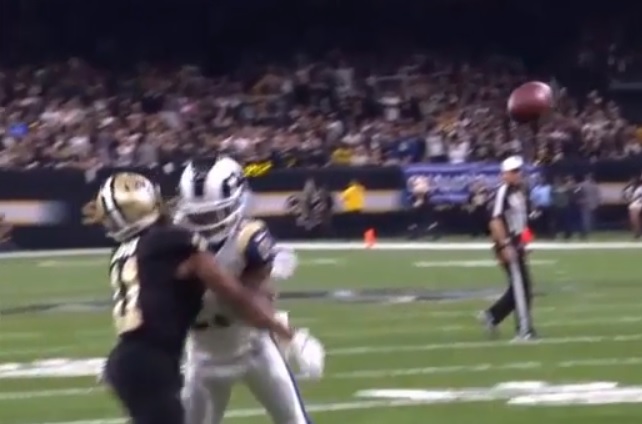 Last night during the NFC championship game between the Saints and the Rams the refs missed a huge pass interference call that ended up helping the Rams punch their ticket to the Super Bowl.

According to Saints coach Sean Payton the NFL went to admit that the refs on the field blew the call.

"Just getting off the phone with the league office … they blew the call."

Sean Payton expressed his frustration at the missed pass interference called in his postgame presser. pic.twitter.com/S9RcBV3heP

Apparently the ref who missed the pass interference call is from Southern California and another ref on the crew played for the LA Rams and Saints’ rival Atlanta Falcons.

Gary Cavaletto, the ref who swallowed his flag on the infamous no-call benefiting the Rams, lives within 2 hours of L.A.. His crewmate Phil McKinnely went to UCLA and played for the L.A. Rams and Atlanta.

A question: could the NFL do more to avoid these optics at this stage?

Saints fans clearly don’t think it was a coincidence that the refs who missed the call have ties to California.

🤔🤔🤔 #Nfl referee Phil McKinnely played for the Rams in 1981! #RodgerGoodell better take action on this one! pic.twitter.com/PYgKuYj5G6

McKinnely, a California native, not only played at UCLA … but also for the Los Angeles Rams in 1982!!!

BTW … His Wikipedia page has been updated pic.twitter.com/SlqKS58aTn

So 1 ref from last night played for the Rams and the Falcons, another 1 lives in L.A…come on @NFL were there no background checks made? Does the NFL not care about integrity & just want whoever they think is going to make them the most $ in?

So one of the refs played for @RamsNFL in 81 and others from Cali…. wowwwww

They should absolutely enforce the the pass interference call, and then resume the game from that point. Not the Saints fault that 2 biased refs cost us the game, 1 who lives not far away from L.A., and another ref who actually played for the refs at one point in time. https://t.co/k37UNRlSdP

This is the ref that missed that last call. Wikipedia never fails to disappoint. 😂 Also, he played for the Falcons, was part of Bountygate and happens to live in L.A. 🤷🏼‍♀️😉 pic.twitter.com/J5sGZL1srw

Maybe next time the NFL will do some background checks on refs before having them work big time playoff games.