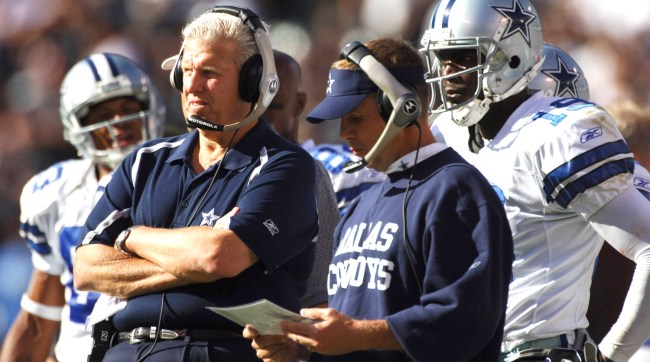 See that photo up there? It’s similar to something we might be seeing very soon on the Dallas Cowboys sideline. That’s Sean Payton (along with Bill Parcells and Keyshawn Johnson) back when he was the Cowboys’ assistant head coach and quarterbacks coach – the positions he held before becoming head coach of the Saints.

That’s because rumors of Sean Payton taking over as head coach of the Cowboys just keep growing and growing.

Which would be pretty amazing, considering how in demand Jason Garrett is as an NFL head coach. At least according to Cowboys owner Jerry Jones – who would never embellish the truth.

“If Jason Garrett had been out on the market two weeks ago, he would’ve had five offers for head coaching,” Jones said on his weekly radio appearance last week. “I know that. And so you’ve got to look at what your alternative is.”

Well, Jerry, what if that alternative was Sean Payton?

Granted, Payton still has two years left on his contract with the Saints, and Garrett has another year left on his deal, stranger things have certainly happened.

It’s important to note that during that same radio appearance, Jones also said about Garrett returning as coach in 2019, “Why would I put some kind of statement out that says this is what we’re going to do when we might have an opportunity here next week? This is the time when these things are thought about. This is the time when they are chewed on. This is when you may see an opportunity next week that you didn’t know existed this week in the area of personnel or in the area of coaching. And I’m not trying to be cute here. I’m just saying that one of the advantages that we have is that we can operate with that kind of flexibility.”

Now there’s a vote of confidence.

NFL scout Bryan Broaddus, who has worked with Payton in the past, says don’t rule it out.

“He understands what the [Cowboys] organization means in the grand scheme of things. Sean told me one time, ‘You coach [the Cowboys], they know your name in China. Here, I coach the Saints and they know my name in Tampa, Florida, and in Atlanta, Georgia,'” Broaddus told Dallas’ 105.3 The Fan. “But this is really the world’s biggest stage. And that’s the thing, you always want that big opportunity. He’s adamant about the support the Joneses give. [Jerry] would pour his last dime into trying to make this football team good if he could.

“I think there’s a mutual respect between Jerry, Stephen Jones and Sean Payton and where they’re trying to get. If that opportunity becomes available, I think Jerry will do everything he can to make sure he has the right opportunity for the right guy. If Sean Payton does become available, I think it will be under consideration by the Jones family.”

So what do you think about these rumors, Jason?

That’s pretty much what I figured.