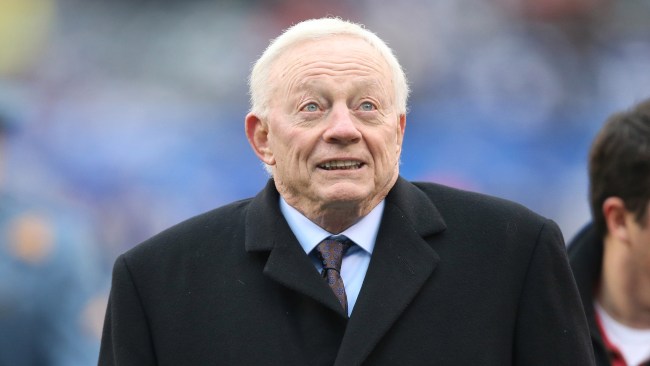 During his weekly radio appearance, Dallas Cowboys owner Jerry Jones gave one of the weakest excuses ever for why his team lost to the Los Angeles Rams in Saturday night’s divisional-round playoff game.

During Jones’ discussion of this past weekend’s playoff loss to the Rams on 105.3 The FAN, Jones dropped this gem of an excuse on his listeners…

“Frankly, we never got traction, and I mean that literally,” said Jones about the playing surface in L.A. “That was a slippery field. If I had to do it over again, we would be really scrutinizing our footwear, our cleats. We had trouble digging in.”

Yes, it was all because of their choice of shoe. Jones does realize that the Rams, who ran for 273 yards, played on the same field, right?

Perhaps, instead of the turf and choice of footwear, it was, as Rams center John Sullivan told The Ringer, “They have good players, but we just felt scheme-wise we were able to — we had a lot of tips and tells on what they were going to do in front of us.”

Heck, Rams guard Austin Blythe claimed the Rams O-line accurately predicted the Cowboys play call on defense over 90 percent of the time during the game.

Jones also shared another laughable line of thinking when he claimed, “If Jason Garrett had been out on the market two weeks ago, he would’ve had five offers for head coaching. I know that. And so you’ve got to look at what your alternative is.”

“We’ve got a very young team. … We’ve got players we’ve got going in a direction, you make changes and you’re going to change direction,” Jones continued. “And you may not know … what that coach has in mind relative to your personnel. … Making a change each year is tough, I’ve done that. And I’ve been there. And I know the price you pay.”

There are some out there who believe that two playoff wins in 8-plus years calls for a “change in direction.”