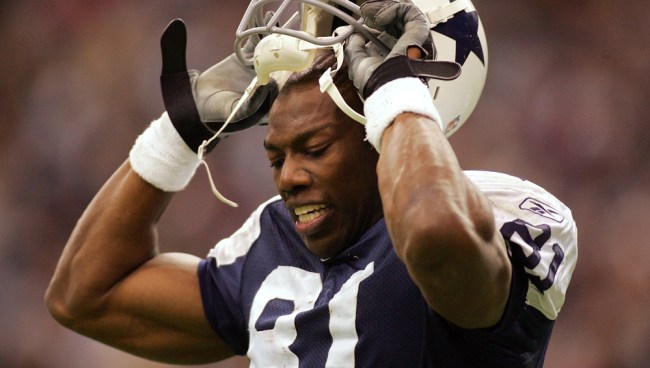 As Erin Andrews liked to point out (over and over) during this year’s NFL playoffs, prior to this season the Dallas Cowboys had only won three playoff games since 1995 until their victory over the Seattle Seahawks.

For eight-and-a-half of those seasons, the Cowboys head coach has been Jason Garrett. During those eight-and-a-half seasons, Garrett – the eighth coach in the franchises’ history – has led the team to the playoffs three times and won two of those playoff games.

That’s not exactly great. And some people out there think it’s time for Garrett to move on, including one-time Dallas wide receiver Terrell Owens.

Owens, who believes that Garrett is the reason Jerry Jones went back on his word to keep him on the Cowboys in 2010, levied some very harsh criticism at the Cowboys coach as they headed to another playoff exit.

No worries. Still a Jason Garrett coached team. All is good Stephen A!! 👍🏾👌🏾 https://t.co/kXX61IHvIu

No weirder than him still having his job with on 2 PLAYOFF wins in 10 years. 🤷🏾‍♂️ Feel bad for the players & the city!! https://t.co/mLBIy3SCBs

I tried BUT Garrett was the HC then too!! See what I’m getting at?! 🤷🏾‍♂️ https://t.co/Fuk0eiUhPG

Dam goes as the HC goes! Trust me, those players r “WISHING” he gets fired. https://t.co/a1oUbNIgOt

Sadly to say, although that sounds good but that probably saved him his job and y’all Dallas fans are gonna be mad the number of years of his extension!! 🤷🏾‍♂️#IJS https://t.co/6MbYLl4nog

Yeh, maybe a little. That sapsucker got rid of me & had Jerry thinking I was the problem. So what has he really accomplished since I left?!! *jeopardy tune* https://t.co/emXbCUj6eg

Owens, while definitely bitter, isn’t exactly wrong. Garrett, who started with the team in 2007 as the offensive coordinator, is by far the longest tenured Cowboys head coach in the Jerry Jones era, has won more than eight games in a season in just four of his eight full seasons, and has won just two playoff games (one against the Lions), counting this year.

Coaches have certainly been let go who have accomplished more than that.