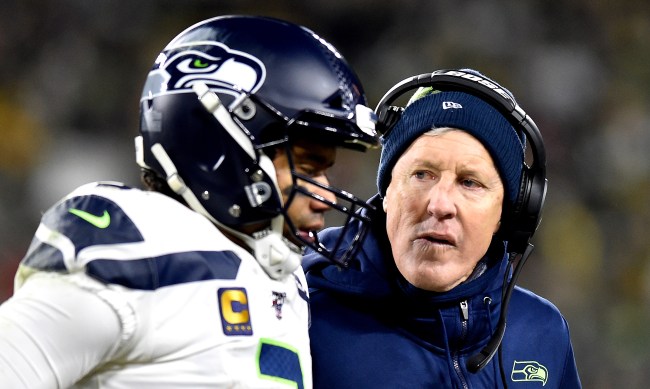 Down five points with just 2:41 remaining in the game, Seattle Seahawks coach Pete Carroll decided that rather than go for it on 4-and-11 on their own 36-yard line he would punt the ball away to Green Bay and hope his defense could shut down Aaron Rodgers and the Packers offense and get the ball back with enough to time still win the game.

The Seahawks never did get the ball back, thanks to a controversial spot on a Packers third down play, and Green Bay advanced on to the NFC Championship game versus the San Francisco 49ers.

On the season Seattle was successful 53.33% of the time on fourth down and had converted another one on Sunday, but Carroll said following the game that he just didn’t feel comfortable going for it at that point in the game.

“We were thinking about going for it in that sequence but not at fourth-and-11,” Carroll told the media. “We thought our odds were so low. We had all the clock, we had the time, we had all the opportunities to stop them to get the ball back. So we didn’t want to put it all on one play. If it were fourth-and-5 or 3 — we went through the whole discussion, but it winds up being a sack unfortunately.”

Carroll was referring to the fact that prior to that punt Seattle had the ball with a third-and-5 at its own 42-yard line, but Russell Wilson took a sack, moving that ball back to the 36 and making it a longer fourth down attempt.

Even so, analytics says that in that situation Carroll still should have gone for it.

Even with three timeouts left, there's a chance the #Seahawks never get the ball back in this game.

Punting cost them 8% pre-snap GWC vs. going for it.#SEAvsGB

With a Surrender Index of 4.32, this punt ranks at the 86th percentile of cowardly punts of the 2019 season, and the 83rd percentile of all punts since 2009.

NFL fans, including many in Seattle were very disappointed in Carroll’s decision.

Love to watch Pete Carroll punt away a team’s season

The Seahawks, with the season on the line, chose to punt on fourth down with two minutes left in the game.

They chose to bet on their defense, which had been getting shredded all game and all year long. Instead of putting the ball in the hands of RW.

Pete Carroll lost us the football game by choosing to punt with two minutes left in the game.

So when is Pete Carroll getting fired? Horrible first half and then you punt it with 3 minutes left? #SEAvsGB

Pete Carroll is coaching like he has a defense he doesn’t have and a running game he doesn’t have. He took the ball out of the hands of the best player on EITHER TEAM and chose to punt. It’s time for a coaching change with Wilson is still in his prime. #SEAvsGB

I think Pete has forgotten that kam earl and Richard aren’t playing in the secondary anymore. No idea why you punt the ball away to Aaron Rodgers. He’s got to have dementia or he’s delusional about his defense.

Aaron Rodgers when he saw Pete Carroll punt on fourth down pic.twitter.com/PDp8tQNyM5

"Any time you can run three the ball three times and then punt, you do it. That's how you establish the run" – Pete Carroll

Pete Carroll can be furious with the spot but that’s not going to change the fact that he chose to rely on his defense instead of one of the greatest quarterbacks of all-time. That punt was inexcusable.

Seahawks on 2nd and 3: Marshawn Lynch rush for 1 yard