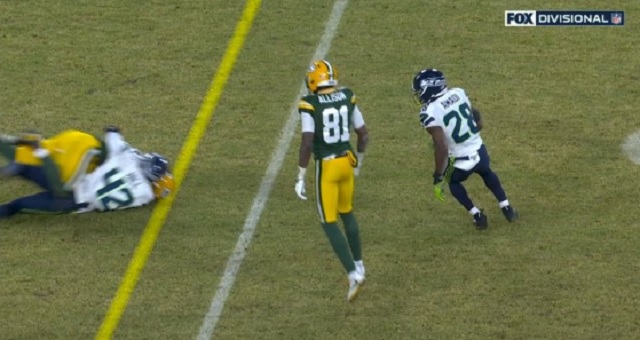 Another week another referee controversy in the NFL.

On a crucial 3rd-and-9 at the Seattle 45 with two minutes left in Sundays divisional playoff game, the Packers needed one more first down to basically put the game away since the Seahawks only had one timeout remaining. Rodgers was able to hit tight end Jimmy Graham with a quick pass. Safety Lano Hill tried to tackle Graham short of the first down marker, but Graham was given a generous spot by the refs and the game was basically over.

Was it a first down? pic.twitter.com/Ma7OqvvLJQ

The NFL took several looks at the play and even got “additional footage” but still ruled Graham’s catch a first down.

"After review, we had additional footage that came in that did not change the ruling. The ruling on the field stands. It is New England's ball, first down"

Seahawks fans at home believed that Graham was short of the first down and they were pissed.

This is so messed up!! Look at my footage @NFL is the helmet skidmark not before the spot?? #SEAvsGB pic.twitter.com/z0n62FnWOa

I’m sorry homie but this dudes helmet is barely touching the first yard line. What an awful original spot and an even worse job after. How the fuck is it 2020 and we can’t have a some type of technology to spot balls/know when a ball crosses certain thresholds pic.twitter.com/6qBq0T7VIn

Man @NFLOfficiating is just soooooo bad. No question Jimmy Graham was holding the ball below his helmet and the helmet was down at the first down line The @Seahawks got screwed on that spot but I’m sure @packers fans don’t mind. #Seahawks #Packers pic.twitter.com/ZfjV7xnDu1