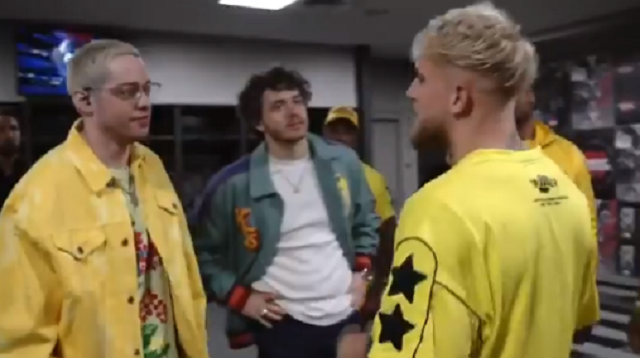 There was an awkward moment before Saturday night’s Jake Paul-Ben Askren fight.

Throughout the night, comedian Pete Davidson served as the backstage reporter which led to some funny moments like when he joked about the fact about how unprofessional the event was considering they hired him.

TOTALLY UNEXPECTED: Pete Davidson reports from Jake Paul's "fight" saying "Today is a wild day for boxing because it shows how low it truly sunk. I think today proves the fact that if you have enough followers, you can truly fucking do whatever you want." pic.twitter.com/OBG3tIsN4L

Before the start of the main event of Triller’s fight club, Davidson made his way backstage with rapper Jack Harlow to interview Paul.

During the interview, Davidson asked Paul an uncomfortable question that was muted by the live stream and led to Paul telling Davidson “you can’t joke about that.”

TODAY IN CRINGE: Pete Davidson and Jack Harlow interview Jake Paul in the pre-"fight" show. One of Pete's questions gets censored and removed from the broadcast, Jake answers it by saying "You can't joke about that." What do you think Pete asked Jake? pic.twitter.com/KlMhFUTomQ

is what they bleeped out Pete Davidson asking Jake Paul about his sexual assault allegations? 🙃

I am not positive but I’d be willing to bet, they just cut the audio on the Triller broadcast when Pete Davidson was talking to Jake Paul, because he was joking with him about his “CTE diagnosis” #TrillerFightClub