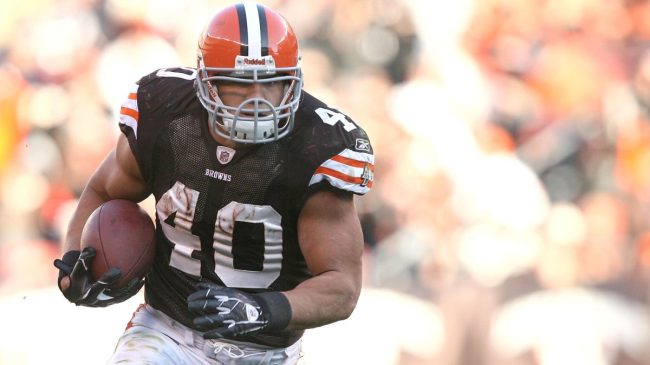 The Madden ’23 cover was released on Wednesday, giving fans a face to put with the video game before they head to the store to purchase it.

While the front page historically features one of the NFL’s top performers from the year prior, at least since the turn of the century, the franchise got it right by putting namesake John Madden on the cover this time around. Madden passed away earlier this year.

Prior covers, though, have donned superstars like Barry Sanders, Ray Lewis, Tom Brady, and Calvin Johnson. There have also been a few questionable calls who saw their careers fall off after making their Madden debuts (looking at you, Antonio Brown).

Still, there’s one that remains the most head scratching of all. On Wednesday, fans got an opportunity to look back at the past covers, and they’re quick to point out the outlier.

For those that don’t remember, Peyton Hillis absolutely took over the NFL for about four months. In the 2010 season, the Cleveland Browns fullback racked up an 1,100-yard season while finding the endzone 11 times. He also hauled in 61 passes to amass in incredible 1,654 yards from scrimmage.

He was the second coming of Mike Alstott for that one year.

Still, even in his most successful campaign, Hillis wasn’t a Pro Bowler. The seventh-round pick never saw a season close to that production, either before or after his 2010 performance. In fact, the 11 rushing scores accounted for 48% of his career total. The 1,654 yards were worth 43% of his career output.

So how did he land the Madden cover? A fan vote.

Hillis was voted in over players like Michael Vick and Aaron Rodgers by Browns fans looking to put their star on the map.

Fans were quick to comment upon remembering Hillis’s 15 minutes of fame.

To this day, has anyone ever figured out how Peyton Hillis got on there? https://t.co/eAt6WxyPXD

Still trying to figure out how Peyton Hillis got on a Madden cover pic.twitter.com/VvB1gpIgV5

Thinking about when Peyton Hillis dominated the league for 4 months 😂pic.twitter.com/gHZtiEutza

Peyton Hillis being on a cover is absolutely classic. #DawgCheck pic.twitter.com/254BieglWA

peyton hillis is trending so it must be madden cover day

That cover appearance will forever live on.