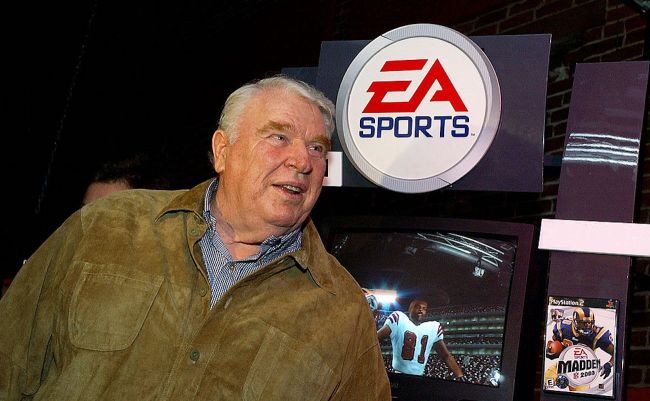 Late last year, legendary NFL head coach and broadcast John Madden passed away at the age of 85-years-old, leaving behind a legacy as one of the most significant figures in the history of the National Football League.

In addition to his contributions as a coach and broadcaster, though, Madden was also known to an entire generation as the namesake of the wildly popular Madden franchise, which has been the only officially licensed NFL game in town ever since ESPN NFL 2K5.

First launched in the 80s, Madden has been a staple of football culture for decades on end, and as a result, EA Sports — the makers of the game — are honoring the legacy of John Madden by putting him on the cover of this year’s edition of the game, marking Madden’s first appearance on the cover since the year 2000.

Once the news was officially announced on Wednesday morning, football fans took to social media to share their delight that Madden was being remembered in such a just way.

The Madden 23 cover. As it should be.

It’s the first time John Madden is on the cover since 2000. pic.twitter.com/0jWpOciQKt

“What a great tribute.”

Here it is: The late John Madden will be on the cover of Madden NFL 23. 🙏 pic.twitter.com/btRwMYZ0Uu

John Madden on the cover of Madden for the first time since 2000 #Footballguy pic.twitter.com/Tm5zDCv4Vh

In loving memory of John Madden, he will be featured on Madden 23's cover this year pic.twitter.com/lDVKQ8jMF4

The announcement of Madden returning to the cover of his own video game comes a day before EA Sports is set to drop the first trailer for the 2023 edition of the game on Thursday, June 2. While Madden 23 does not yet have an official release date, the game has traditionally been launched around mid-to-late August to coincide with the beginning of the corresponding NFL season.

RELATED: 1993 Clip Of John Madden Talking About The Dangers Of Concussions Makes All Of The People Trying To Scapegoat Him Look Real Dumb