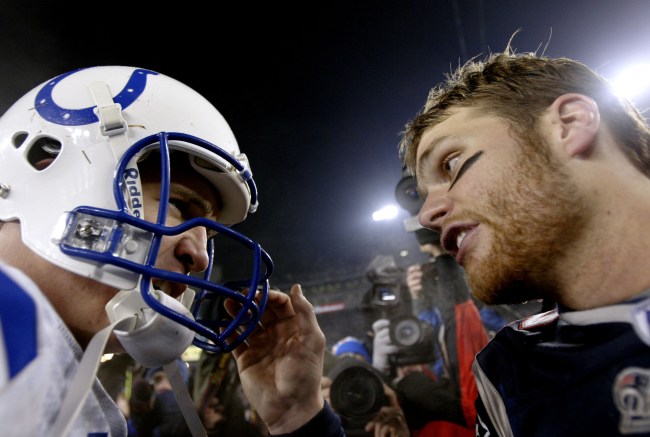 The Brady vs. Peyton rivalry has been one of the most compelling in sports over the past two decades, with the future Hall of Famers squaring off 17 times. Brady has secured 11 of the 17 wins but Peyton’s edged out TB12 in the playoffs with three wins to Brady’s two.

With last Sunday’s win over the New York Giants, Tom Brady passed his nemesis on the NFL’s career passing yards list, moving into second place only behind Drew Brees. Despite the Patriots signal caller holding 54 NFL records in his career, surpassing his rival has to be extra sweet for the six-time Super Bowl champion.

With Peyton’s legacy solidified in retirement, the two have nothing but a complimentary relationship, like members of different branches of the military who fought in the same war.

In a teaser clip from the new “Peyton’s Places” episode featuring Brady that aired during Monday night’s pregame show on ESPN, the two legends bantered back-and-forth about the suspicious volume

Brady: “You couldn’t hear anything.”

Manning: “We didn’t pump in any noise either.”

May we not forget that the Atlanta Falcons forfeited a fifth-round draft pick on top of being fined $350,000 by the NFL for pumping artificial crowd noise into the Georgia Dome during home games in 2013 and 2014. So Brady’s suspicious may have legs.

Brady and Manning’s flirtatious banter continued with Brady telling Manning in another clip:

“I’d always looked up to you, because you were older than me.”

“Right,” Manning replied. “Still am. Thanks.”

They eventually kissed and made up.

Manning: “What I miss is the rivalry. Of all people, it’s like, we cannot give Brady the ball back too quickly.”

Brady: “We never had any margin of error when we played against you.”

Brady is currently chasing Manning’s record for all-time touchdown passes in the regular season. He currently sits 12 behind The Sheriff.

Preview of Brady and Peyton together on "Peyton's Places"

Brady: You couldn't hear anything

Manning: Yeah, we didn't pump in noise either

Brady: You're full of shit