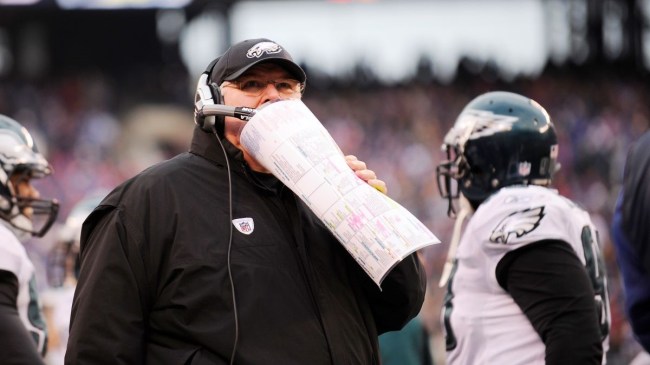 Oh, and reigning AFC champion Cincinnati is just 5-4. The only team that seemed to separate itself from the pack was the Philadelphia Eagles, who began the season with eight consecutive wins. But even Philly showed cracks in the armor with a loss to the Washington Commanders a week ago.

Predicting the participants in Super Bowl 57 is a complete and utter crapshoot at this point. Hell, I can’t think of anyone outside of the state of Ohio that would’ve picked the Bengals to reach the Super Bowl prior to the playoffs last season.

But Pro Football Focus has run the numbers, and two teams rise above the pack when it comes to Super Bowl odds.

In the immortal words of legendary rapper Jay Z, “men lie, women lie, numbers don’t.” And the number here very clearly like both the Chiefs and the Eagles.

What is the most likely Super Bowl matchup? pic.twitter.com/5BSJnKF9Tm

PFF says that a Kansas City-Philadelphia is the most likely Super Bowl 57 matchup at nine percent. Each team also has a seven percent chance of appearing against different opponents, with the Chiefs playing the Vikings and the Eagles playing the Bills.

Oddly, PFF gives Philadelphia just the third-best chance of actually winning the Super Bowl, behind both Kansas City and Buffalo.

The teams most likely to win the Super Bowl, per PFF’s Power Rankings 🏆 pic.twitter.com/MUgBAgTM0G

Their numbers aren’t far off from those of the Sportsbooks. DraftKings has the Bills as the Super Bowl favorite at +400, with Kansas City just behind at +500 and Philadelphia at +600.