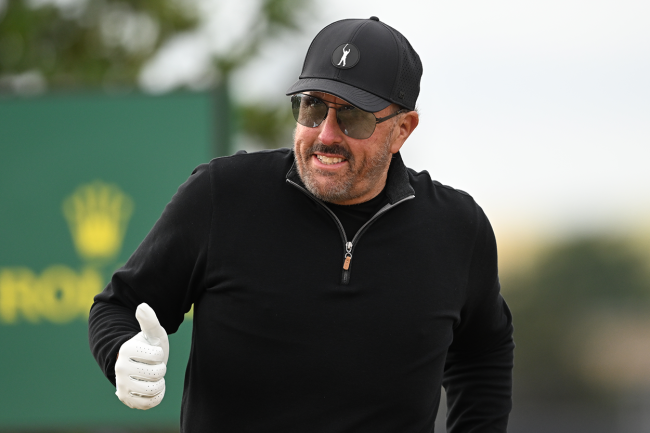 Greg Norman was not invited to attend the Champions Dinner at The Open Championship. Phil Mickelson was.

However, he did not attend.

Mickelson spoke to reporters on Thursday and explained why he was not there. He said that R&A officials (the governing body of golf outside of the U.S.) reached out to him and suggested that it might be better if he was not there.

They said that he could attend if he wanted to, they did not withdrawal his invitation, as they did Norman’s. But they hinted that it would not be in anyone’s best interest.

Mickelson agreed. Or, at the very least, he wasn’t going to fight it. It wasn’t worth it.

“The R&A contacted me a couple weeks before and said, ‘Look, we don’t think it’s a great idea you go [to the celebrations], but if you want to, you can,'” Mickelson said. “I just didn’t want to make a big deal about it, so I said fine. We both kind of agreed that it would be best if I didn’t.”

As the press conference continued, Mickelson spoke about his controversial decision to join the Saudi-backed LIV Golf league. He made it very clear that he is doing just fine.

“I made the right decision for me,” Mickelson said. “And I’m excited about, like I say, having the opportunity to play competitive golf and have it in my life in a more moderate scale to where I can do some things outside of that too. I freed up a lot of other — freed up a lot of time as well.

“I couldn’t be happier. I think it’s been really good. I can’t wait to get to New Jersey and play another event there. The player experience, the experience of those events from a player standpoint is a 10. You can’t get it any better. Look, it’s not my job to explain or help you understand or whatever. It’s just, I couldn’t be happier.”

And that’s when things got spicy.

The reporter, who had already asked a similar question multiple times, pissed Mickelson off. He was continuously asking Mickelson whether he found it “very sad” that he was now in a position where he was encouraged to skip the Champions dinner, one that he had earned the right to attend.

“Even missing out on an occasion like the past champions dinner with the 150th …” the reporter began for the third follow-up question. Mickelson was quick to cut him off.

“Let it go, dude. Let it go. That’s three times you’ve asked the same question. I don’t know what to tell you. I couldn’t be happier.”

This is the first time that Mickelson has showed frustration with the consistent line of questioning in regard to LIV golf. On Thursday, however, the reporter’s persistence was less about the logistics of his decision and more about his emotions. The snap back was warranted to some extent.