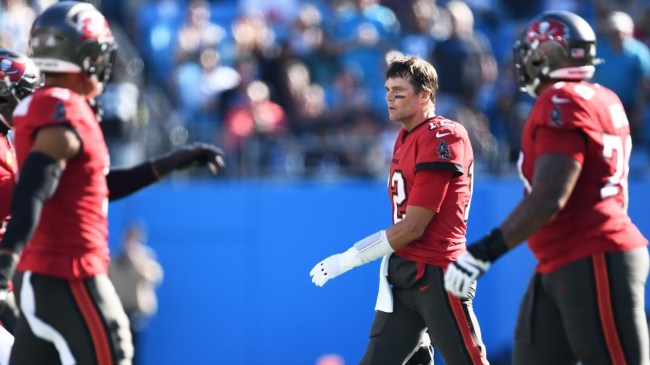 As near the halfway point of the 2022 NFL regular season, things appear to be trending in the wrong direction for the Tampa Bay Buccaneers.

The Bucs’ season started with a lot of noise after seven-time Super Bowl winning quarterback Tom Brady skipped preseason practices for an alleged bevvy of reasons. But Tampa Bay sent a message with a resounding Week 1 victory over the Dallas Cowboys. That victory seemingly sent a message that the Buccaneers were a force to be reckoned with.

But things have gone awry since that point. Tampa Bay is just 2-4 in its last six games heading into a Thursday Night Football showdown with the Baltimore Ravens. Among those four losses are defeats to the lowly Pittsburgh Steelers and Carolina Panthers.

While the Bucs’ defense is one of the best in the league, the offense is a different story. Brady is averaging 277 yards per game, but he’s thrown for just eight touchdowns through seven games. Tampa’s offense is the fifth-worse in the league in scoring at 17.7 points per game.

And eight-time Pro Bowl QB Phil Simms seems to know the reasons for those struggles.

Brady eventually returned to the team and hasn’t missed games since doing so. But that doesn’t mean he hasn’t cost controversy. Between his reported impending divorce and instances of him berating teammates, Brady has remained in the headlines for all the wrong reasons.

In Simms says those headlines are a large reasons why Tampa Bay has struggled in 2022. Simms even pointed to one specific, reason issue that he believes upset teammates.

“The distractions caused by him: Going away for 10 days in training camp, what went on with the wedding is a distraction to the football team. It hurts,” Simms said in a segment of Paramount+ show “Inside the NFL.”

He then went on to speculate that Brady would have stayed retired if he knew what returning meant.

“If you could go back in time, Tom Brady would stay retired down in Tampa, no doubt about it,” Simms said. “He didn’t know he was going to lose his center and two guards, that’s one thing.”

Brady and the Bucs risk falling to 3-5 with a loss to Baltimore on Thursday, and if the betting public is any indication, it could well happne/