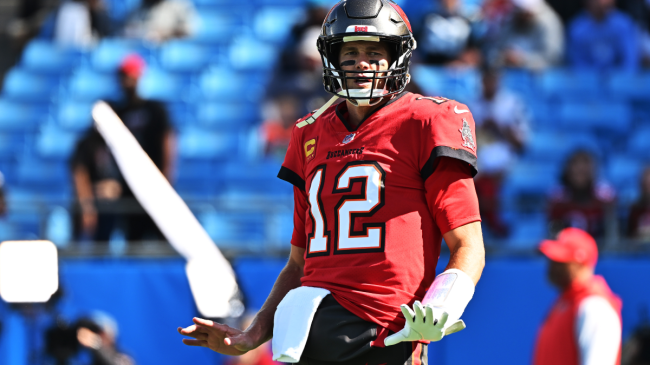 Tom Brady and the Tampa Bay Bucs have struggled in 2022. The team is just 3-4 heading into a Thursday night matchup with Baltimore, meaning the prospect of a 3-5 start is a very real possibility.

Brady has looked off this year, with his team uncharacteristically dropping games to cellar dwellers. The Bucs currently find themselves on a two-game losing streak with the latest defeats coming against the Steelers and Panthers. Those teams have combined for just two wins when not including their victories over Tampa Bay.

Off-the-field issues have likely contributed to the play on the field, as Tom Brady’s very public divorce from wife Gisele Bundchen continues to unfold. Every single aspect of the passer’s personal life has been put under the microscope since his decision to un-retire this offseason. He’s been criticized for attending Robert Kraft’s wedding, taking a leave of absence during the preseason, and scheduling days off throughout the practice week.

With the negative attention continuing to follow the quarterback, combined with his team’s struggles on the field, the public is not high on Brady and the Bucs.

Only about 25% of bettors have faith in Tom Brady, which could be a bad sign for Baltimore.

Brady seems to thrive as the underdog, a trend that’s continued ever since his massive Super Bowl win against the Rams in 2002. He sees that familiar setting on Thursday night ahead of his matchup with the Ravens.

According to Action Network researcher Evan Abrams, only about 27% of tickets are on the Bucs tonight. That’s been a bad omen for Brady’s opposition in the past.

Brady is perfect when entering with less than a third of the public behind him, which hasn’t happened in nearly a decade. It actually sets up as a nice bounce back opportunity for the Bucs with the team playing at home against what’s been an explosive but inconsistent Ravens offense.

Tampa Bay enters as a two-point favorite. We’ll see if Tom Brady can keep his streak alive and prove his doubters wrong yet again.