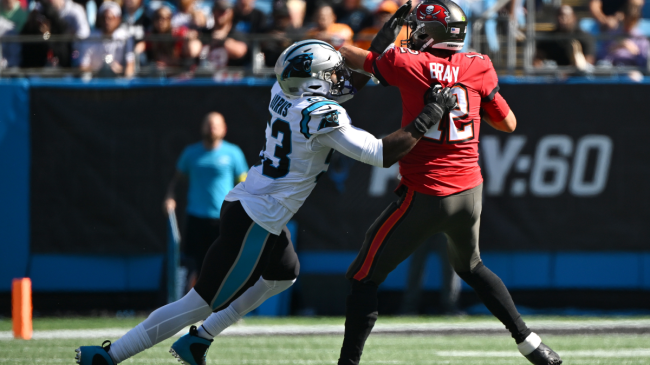 Tom Brady’s 2022 season has not gone according to plan.

The signal caller decided to return for another year after initially retiring this offseason. That decision has potentially ruined his marriage to supermodel Gisele Bundchen, a distraction that’s seemingly affecting his play on the field.

The Bucs are just 3-3 on the year with their latest loss coming to a two-win Steelers team. While that might’ve been considered rock bottom, they’ve reached a new low just two weeks later.

Tom Brady and Co. were beaten by the 1-5 Panthers 21-3 late on Sunday. The same Panthers team that just fired its head coach and traded away its best player. Not to mention, Carolina started third-string passer PJ Walker under center.

Many are taking a jab at Tom Brady for un-retiring to lose to the Panthers.

This is easily the biggest upset of the NFL season, as Brady and the Bucs continue to reach new lows in 2022. Remember, this is a team just two years removed from a Super Bowl title. They were one of the NFC’s top teams last season, too.

But something is off this year, and it’s given viewers the perfect opportunity to pile on.

Take a look at what people are saying on social media.

Some are saying he might rethink that decision to retire. He could’ve gone out on top after making the postseason and winning the Super Bowl over his final two seasons. Now, he’s losing to some of the NFL’s worst teams.

Tom Brady after this game pic.twitter.com/WThGpUeZi2

Many are joking that Gisele is enjoying watching her soon-to-be ex struggle on the field. Brady’s choosing football over family is said to be the leading factory in their divorce talks.

The turbulent start in Tampa may not bode well for the Bucs. The only other time Brady began a season 3-4, he missed the playoffs.

The Bucs are down 18 with 7:25 to go and Brady just missed on a 4th down throw. If they lose Tampa falls to 3-4. Tom Brady led teams have been 3-4 just once in his career: 2002 his 1st full year as a starter. The Patriots missed the playoffs that season

Things continue to go downhill for Brady in 2022. This might be rock bottom.