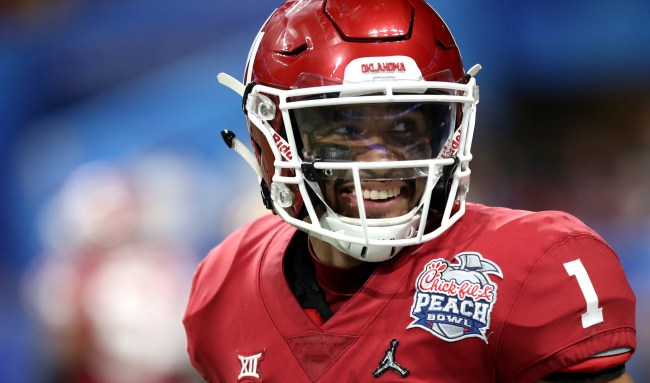 Outside of the Packers trading up to select Jordan Love during the first round of the NFL Draft, the biggest surprise was the Eagles taking Jalen Hurts with the 53rd overall pick.

Philly using its second-round pick to take a quarterback just one year removed from signing Carson Wentz to a massive deal left just about every NFL fan scratching their head, especially Eagles fans. It turns out that Eagles general manager Howie Roseman has a master plan and sees Hurts as more than just a quarterback that may have a few packages here and there.

Roseman sees Hurts contributing to Philadelphia’s offense right away and according to NFL Network’s Mike Garafalo he may see snaps as a ‘straight running back,’ not just as a dual-threat QB like Taysom Hill.

“I know we’re talking about Taysom Hill, but Jalen Hurts will be in his own unique role,” Garafalo explained during an NFL Network segment.

“He will be on the field, though, this upcoming season and, the Eagles hope, for the next four years as a guy who can contribute to the offense other than a quarterback. They’re hopeful they won’t need him as a quarterback, because that means Carson Wentz is healthy and on the field. Talking to one Eagles source, they said, ‘This guy might be able to contribute as a straight running back, that’s how good we think he is, that’s what we think of his skill set.'”

We discussed that clip of #Eagles GM Howie Roseman I just tweeted on NFL Now on @nflnetwork pic.twitter.com/o6elurDy3e

For Eagles fans, on the one hand, having both a Taysom Hill-type player on the roster that can also line up in the backfield as a ‘straight running back’ is exciting. On the other hand, your team may have just spent its 53rd overall pick on a quarterback that may never play quarterback and instead become a short-yardage specialist and/or decoy.

If that second scenario plays out, well, that will be a tough pill to swallow.

Hurts enters the league as a proven winner and with the fact that Wentz has struggled to stay healthy then maybe he gets a legitimate shot under center, but he’ll forever be known as a (very) questionable pick if things don’t work out.