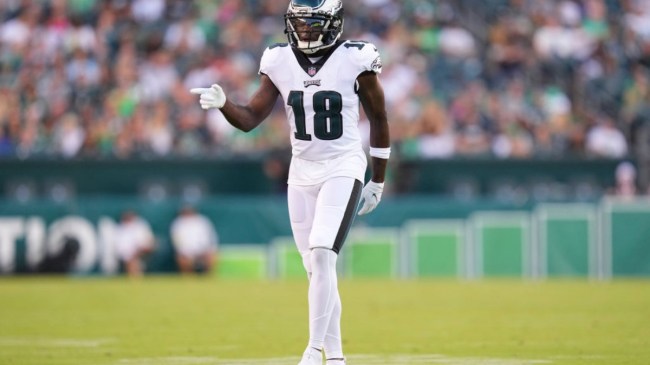 The Philadelphia Eagles have made some early picks at wide receiver in recent years that their fans would love to forget.

Back in 2019, the Eagles drafted JJ Arcega-Whiteside in the 2nd round, ahead of both DK Metcalf and Deontae Johnson. While the other 2 went on to be Pro Bowlers for the organizations that drafted them, JJAW made only 16 catches before becoming a special teams player. The Eagles traded him to the Seahawks this offseason.

In the following draft, the Eagles spent a first round pick on Jalen Reagor, taking him right ahead of Justin Jefferson. Jefferson has already established himself as a top 5 receiver in the league while Reagor was only able to put together 676 yards over his first two season.

Now the Eagles have moved on from him too. According to ESPN’s Adam Schefter, they have traded him to the Minnesota Vikings in exchange for a 2023 7th round pick and a conditional 2024 4th round pick that could be downgraded to a 5th rounder.

Trade: Eagles are sending WR Jalen Reagor to the Minnesota Vikings in exchange for a 2023 7th-round pick and a 2024 conditional 4th-round pick that would deescalate to a 5th-round pick if certain statistical marks are not met, sources tell ESPN.

Luckily for the Eagles, they seem to have done a better job in the draft last year when they selected DeVonta Smith in round 1 and have since made a trade for AJ Brown.

However, trading Reagor to the team that did end up with Justin Jefferson is still going to sting for Eagles fans.

Maybe a big year from Smith and Brown can help them move past these their disappointing recent history at the position.