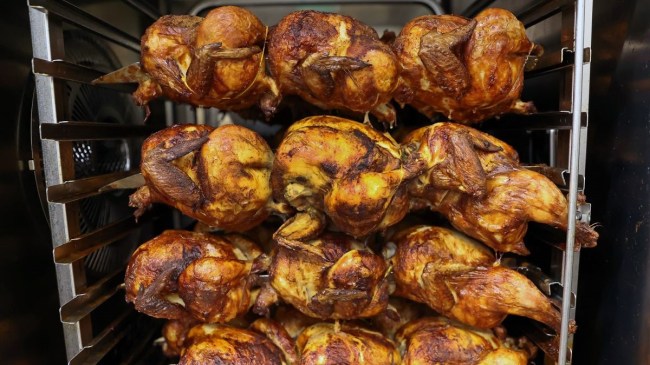 We’ll forgive you for not noticing, but Saturday was a pretty rough day for the city of Philadelphia. The Philadelphia Union suffered a shocking collapse to lose the MLS Cup to LAFC. Then, just hours later, the Phillies dropped Game 6 of the World Series to the Houston Astros, ending the series.

But Philadelphians are resilient. After all, if you’re remotely familiar with the history of Philadelphia sports, you’ll know they have no other choice. So rather than let the sports world beat them down (again), the citizens of Philadelphia took to the streets.

They didn’t hold a parade. They didn’t riot. Instead, they did what any good man would do in dire times. They assembled at an empty pier to watch a random 31-year-old man eat an entire rotisserie chicken in one sitting.

Philadelphians Rally Around The Legend Now Known As The Chicken Man

Alexander Tominsky is but a humble server at Philadelphia steakhouse Barclay Prime. But now, he’s engrained himself as a legend in the city.

Tominsky set out with a strange goal in late November, eat 30 entire rotisserie chickens in 30 days. Why would he do this? Because, he said, it was “the right thing to do.”

Eventually, that goal morphed into 40 chickens in 40 days He later put up fliers across the city inviting locals to come and watch him complete his goal on an empty pier outside of Walmart. Y’know, the Walmart by the IKEA, that one.

The fliers did note. however, that this was not a party.

had your heart ripped out twice in about an eight-hour span, sometimes you just need a party. So they came and they watched. And they cheered. And they chanted, as the legendary chicken man attempted his feat.

The most Philly thing ever i love it😅 you didn't even have to ask the answer was unequivocally undoubtedly YES @AlexiconTom aka #ChickenMan pic.twitter.com/tQpHFflPZm

My friends are out cheering on other friends at the NYC marathon. And I’m here cheering a man eating a whole rotisserie chicken for the 40th consecutive day. Different strokes for different folks. #chickenman pic.twitter.com/F9zgqvwWRb

“I’m no hero, I’m but a man,” he said to the crowd. “I ate the chicken. I did the best I can (and) I just thank you all for being here, and thanks for watching me consume.”

Eventually, Tominksy stood triumphant, finishing his final bite as Bruce Springsteen’s “Streets of Philadelphia” blared out from a portable speaker.

What makes the feat even more impressive is that it turns out he doesn’t even enjoy chicken to begin with.