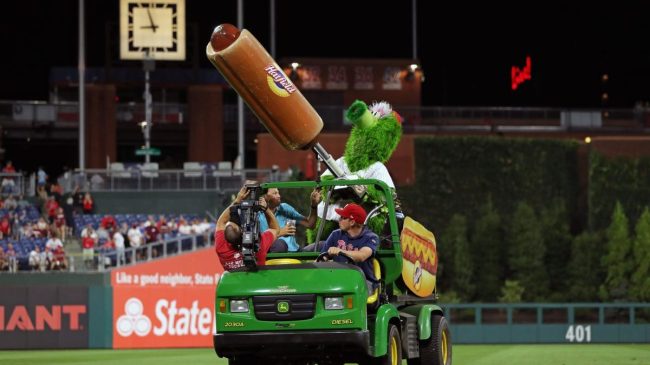 The Philadelphia Phillies picked up a desperately needed walk-off victory on Monday night. But Matt Vierling’s 10th-inning single to beat the Toronto Blue Jays pales in comparison to the big story of the night.

The win moved Philadelphia 2.5 games clear of the Milwaukee Brewers for the final National League Wild Card spot. But it also may have covered up a scandal of epic proportions.

Philadelphia Phillies, US Senator May Have Cooked The Books On Dollar Dog Night

Philadelphia’s game against Toronto was the final Hatfield Dollar Dog Night of the year at Citizens Bank Park. As is customary, the ballpark tracked the number of dogs sold throughout the night.

But now it appears those numbers may not be as trustworthy as we first believed. Kyle Pagan of Philly sports blog Crossing Broad pointed out that the dollar dog counter in the park started to count backward at some point in the game.

Fans were shocked and appaled by the revalation.

This needs to be investigated.

If you’re at Boardwalk Eats STAY IN LINE

On its surface, the counting issue seems innocuous enough. But this scandal runs deep, much deeper.

The Phillies had initially limited Dollar Dog Nights, their most popular promotion, compared to previous years. But Pagan then went to work and recruited some heavy hitters to change the organization’s mind.

One such heavy hitter was United States senator from Pennsylvania, Bob Casey.

.@Bob_Casey thanks for caring about women’s rights AND dollar dog nite 🌭 pic.twitter.com/Y0JqISjkrY

Casey put his influence to good work and got the team to add the promotion back to the calendar. But now fans are left to wonder what he may have known about the improper counting.

Was this an inside job? Was it a ploy by stadium workers to spark a comeback? Were the Phillies just embarrassed by their craven fans?

They should make every Phillies game dollar dog night, I had a guy bark at me tonight while I held his 30 dogs.

We’ll likely never find out the cause of the questionable counting. But Dollar Dog Nights are back. And they’re saving both the team and its fans.

A Delaware County man is crediting his overindulgence at a Philadelphia Phillies dollar dog night promotion with saving his life. https://t.co/N0zyIiPBAT