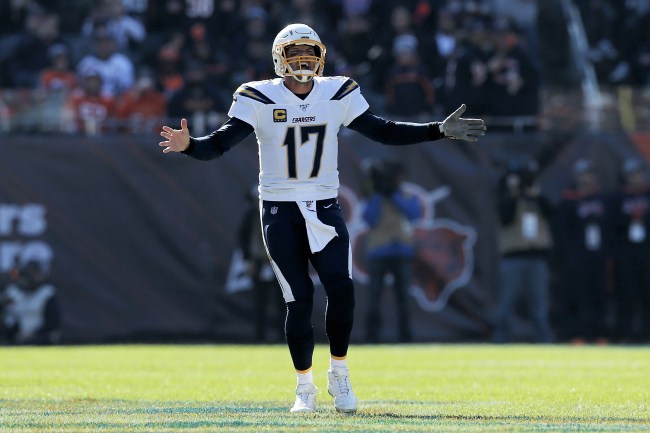 Things are not looking good for Philip Rivers in LA.

Before today’s game it was reported that the Chargers were thinking of replacing him this offseason instead of re-signing him.

Chargers are "seriously considering" a QB change this summer, and multiple scouts have connected them to LSU’s Joe Burrow, per @nfldraftscout pic.twitter.com/uKVLA1rsaw

In the first quarter in today’s Chargers-Bears game, a frustrated Rivers, who has had an up and down season, could be seen on the sideline getting heated and ripping into head coach Anthony Lynn on the sidelines.

Philip Rivers and Anthony Lynn are exchanging words on the sidelines. pic.twitter.com/sCDcf6U6Pj

Unfortunately for Rivers, he threw an interception a few plays later.

#Chargers QB Philip Rivers throws a pick to Kendall Fuller who brings it back into the red zone. Melvin Gordon tackled him. #LACvsCHI

Bears blitzed 5 on that Philip Rivers INT. Looked like Melvin Gordon whiffed on a block in pass pro. Still an absolutely horrendous throw from Rivers. #Chargers