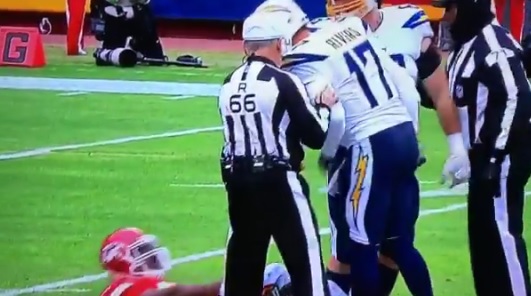 Philip Rivers could be playing in his final game of his career but he doesn’t seem intent on going out without a fight.

Early on in Sunday’s Chiefs-Chargers game, Rivers could be seen punching defensive tackle Chris Jones after a play.

Apparently Rivers felt that Jones went low on him during the tackle.

Why Philip Rivers has a noticeable limp. pic.twitter.com/nj6cdsQepc

CBS finally showed the replay of why Rivers was so mad at Chris Jones and that was legit one of the dirtiest plays I’ve ever seen in the NFL.

Chris Jones did a full on knee snapping jujitsu move 3 seconds after the throw and the refs admonish Rivers for getting upset.

Some people didn’t think Rivers was justified in punching Jones.

Every time I say this Philip Rivers stans parachute in my mentions but it’s true: Rivers gets away with constant petulant, crappy behavior.

This is a punch. A Philip Rivers sissy punch, but a punch nonetheless. Should be ejected. https://t.co/2V9cMvc77S

Philip Rivers don’t want none of that smoke from @stonecoldjones_ .. old man better go home and take care of his village of children before he gets dealt with