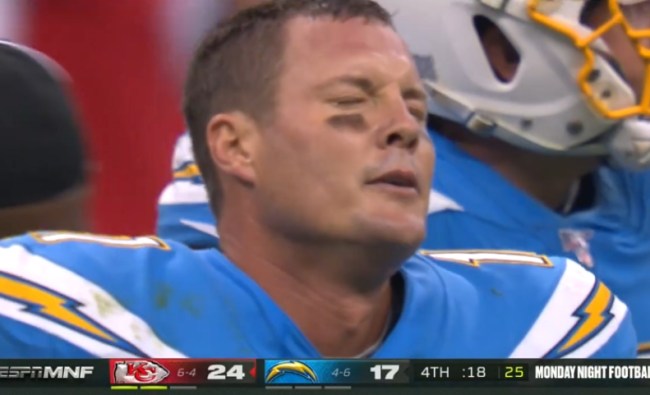 Philip Rivers had himself another rough game this week.

With less than a minute to go and down a touchdown in Monday Night’s Chiefs-Chargers game, Rivers was able to give Chargers fans hope when he was able to complete a 50-yard bomb to Mike Williams and put the team in scoring position.

Unfortunately for the Chargers Rivers threw an absolutely terrible interception in the red zone to lose the game a few plays later.

The Internet instantly mocked Rivers after the game.

Eighteen seconds left to win it.

End zone interception, the fourth on the night.

Philip Rivers to the NFL:

I'm pretty sure even Philip Rivers knows he's washed up but he doesn't want to retire because then he'd have to help take care of all them kids pic.twitter.com/Qx9cvGdb4x

Philip Rivers deciding how he wants to finish a game pic.twitter.com/avLlt119ly

Philip Rivers has almost as many picks as kids the last two weeks.