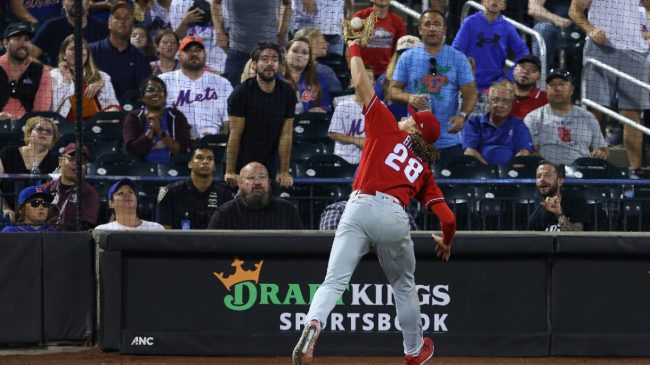 The Philadelphia Phillies are off to a hot start in 2022.

The team took two of three games in their opening series against the Athletics, and now they’ve turned their focus to a division rival.

At 2-1, the Phillies are just a half game behind the Mets in the NL East. A win over New York tonight would give Philadelphia a slight lead in the division race.

Unfortunately, things haven’t gotten off to the best start. And third baseman Alec Bohm has become the target of Philly fans’ ire.

Through the first three innings of Monday night action, Bohm committed three separate throwing errors to help the Mets jump out to an early 3-0 lead.

E5, E5, E5 • Alec Bohm commits an error in *each* of the first three innings tonight

While the first throw was a difficult one, the latter two errors were made on relatively routine plays. Things started getting so bad that Phillies fans were giving standing ovations any time Bohm made a simple putout.

He made two errors right before this play. pic.twitter.com/YmsQpSsV2Q

The third baseman didn’t necessarily take kindly to the sarcastic applause and the home crowd making fun of his tough day on the diamond.

If you read his lips closely, he appears to say, “I [expletive] hate this place,” when passing by teammate Didi Gregorius.

“I fcking hate this place” – Alec Bohm after committing 3 errors in 3 innings.

ya, he’s definitely done in Philly after this if that lip reading is right. pic.twitter.com/mZlFlCSgCC

It’s been a tough day at the hot corner for Bohm, who’s now doubled the team’s season total in errors. Philadelphia will try to shore up that defense and get back in the game.